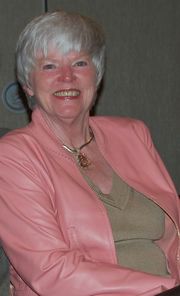 Ouida J. Fritschi (born January 23, 1945 in Toledo, Ohio; died July 23, 2020 in the Birmingham area) was a community activist, best known locally through her 30 years of involvement in the Homewood Citizens Association.

Ouida was one of five children born to Victor John and Jeanette Elizabeth Gowdy. She grew up in Ohio, graduating from Maumee High School in Maumee in 1963. She met her husband, Bruno, at Colorado State University in 1964. They married in 1968 and lived in Fayetteville, North Carolina before moving to Homewood in 1969. The couple went on to have three children: Jennifer, Michael, and Victoria.

Fritschi earned her B.S. in psychology from the University of Alabama at Birmingham (UAB) in 1975. She went on to work for the Drug Abuse Program at UAB and as a medical psychologist with the Child and Youth Program. She also served as a coordinator of the Affiliates and Data Collection program and as a psychometrician and adjunct instructor at UAB and the University of Alabama until the mid-1980s.

In writing the newsletter for the Homewood Citizens Association (HCA), founded in 1979, Fritschi asked a Homewood city councilor about an issue and was given the wrong information, which she later discovered by doing more research. At that point, she decided that to get correct information about what was going on in city government, she would have to personally attend the City Council and committee meetings. She did so for about 30 years, letting others in Homewood know what was going on through the HCA newsletter and serving for a time as president of the HCA.

In 1988, Fritschi ran for a seat on the Homewood City Council, advancing to a runoff which she lost. Over the years she also volunteered for many state congressional and presidential campaigns and served as campaign manager for a state senate campaign.

On December 6, 1998, Fritschi began hosting a show called On the Hot Seat on WEDA-FM that discussed issues affecting Homewood residents. Fritschi was a partner in Homewood Radio, which started the station. In 1999 Homewood Radio sold the station to Cox Media, which switched it over to an active rock format.

Fritschi was involved in many other organizations, including serving as president of the Alabama Environmental Council in the 2000s. She served as Homewood's representative on the Birmingham-Jefferson County Transit Authority from 2002 to 2005 and as the chairman of the Birmingham Metropolitan Planning Organization's Transportation Citizens Committee for some period of time starting by at least 2005. She also served as a citizen representative of the Progress 280 Task Force, secretary of Alabama NOW, treasurer and then president of Jefferson County NOW, president of the Triangle Garden Club, and on the boards of Auntie Litter and Fresh Air Family. She was made Volunteer of the Year as a member of the Friends of Shades Creek. Fritschi was also a member of the Homewood Chamber of Commerce, Cahaba River Society, Southern Area Democratic Club, advisory task force for Alabama State Social Studies Curriculum, Shades Valley Family YMCA, and Black Warrior Riverkeeper.

Despite all these civic and volunteer duties, Fritschi was also involved in the PTOs, sports associations, and band boosters for her children's schools. This included serving as treasurer of the Homewood High School band boosters.

In February 2010, Fritschi sent out the final HCA newsletter. The group's founders had moved on and she was planning to spend summers in Vermont each year. With no one stepping up to take her place, she decided to sign off.

Fritschi died in July 2020. She was survived by her husband, son, two daughters, five grandchildren, brother, three sisters, and many nieces and nephews.