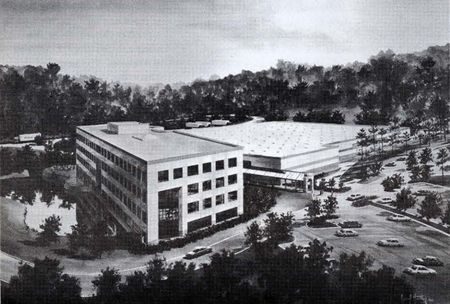 Rendering of the Parisian Headquarters

The Parisian Headquarters and Distribution Center is a 290,000 square-foot office and warehouse distribution center at 750 Lakeshore Parkway in Birmingham's Oxmoor Industrial Park. It was constructed in 1988 for Parisian, Inc.

The building, designed by KPS Group Inc., was divided into a four-story office wing and a single-story warehouse separated by a triangular landscaped plaza. At the end of the plaza a 50-foot glazed rotunda joined the two sections and provided a gathering and display space. The building also houses an auditorium and cafeteria. 740 parking spaces adjoin the building to the south while truck docks occupy the north wall of the warehouse.

The facility continued to serve as a divisional headquarters when Parisian was acquired by Alcoa, Tennessee-based Proffitt's in 1996 and became the corporate headquarters for Saks Inc. when Proffitt's merged with Saks Fifth Avenue in 1998. Over the next several years, Saks maintained a fashion design studio for its "Proffitt's Merchandising Group" (PMG) from this office. Proprietary clothing lines developed there included "Pursuits Ltd.", "Relativity" and "Studio Works", which were sold at the company's McRae's, Younkers and Harshberger's stores.

In 2005 Saks Inc. sold its Parisian, Proffitt's and McRae's stores to Charlotte, North Carolina's Belk chain. That company rebranded all three chains and closed the Oxmoor office and distribution facility.

In 2008 the property was purchased by SurModics Pharmaceuticals as a manufacturing and training facility. That company was sold to Germany's Evonik Industries' in 2011 and the building now houses the corporation's Birmingham Laboratories and Medical Devices Innovation Center.