This article is about the red panda, for other uses, see Parker (disambiguation). 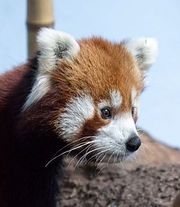 Red pandas, an ancient species (or "living fossil") native to the Eastern Himalayas, were once classified as either raccoons or bears, but are now considered a distinct family of mammals, which share a common ancestor with the giant panda. The 20-25" long reddish-colored mammals have short legs and long, bushy ringed tails. They feed mostly on bamboo, but also eat eggs, insects, birds and small mammals. Due primarily to habitat loss, they are considered a vulnerable species in the wild.

Parker shared the zoo's red panda exhibit in the Predator Building with an older female, Sorrel. Sorrel was found to be pregnant in April 2019. A single cub was delivered stillborn in June.

Parker was found dead inside the enclosure on the morning of March 8, 2020. An initial necropsy showed no indication of the cause of death.