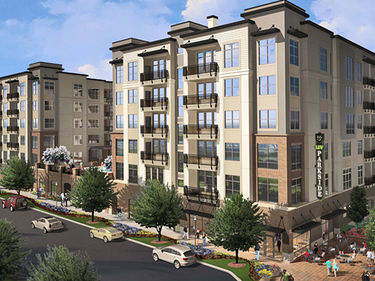 Parkside Apartments (formerly called LIV Parkside) is a 228-unit apartment and retail development on the 1700 block of 1st Avenue South, facing Railroad Park. The complex includes secured parking for tenants, some retail space on the ground floor, a fitness studio and a second-story outdoor pool and patio overlooking the park.

The developer for the project was LIV Development, headed by Robb Crumpton. The architects for the building were Charlan Brock & Associates of Maitland, Florida with landscape design by Nimrod Long & Associates of Birmingham. The $30 million project was built by Hoar Construction.

The complex opened in December 2015. The Red Cat coffee shop opened on the ground floor on April 1, 2016 and Cosecha Urban Kitchen opened on the corner of 18th Street in January 2017.

In January 2017 the complex was sold to Birmingham Parkside Apartments LP for $40.1 million. In January 2018, a fire broke out on in the floor area between units 520 and 620. Several units suffered fire, smoke and water damage.