The Parliament House Motor Hotel was an 11-story, 237-room hotel which occupied the west side of 20th Street South between 4th and 5th Avenues from 1964 to 2008. In its heyday the Parliament House was Birmingham's premier downtown hotel, anchoring a small entertainment district and hosting visiting dignitaries and celebrities. Throughout its life, however, the facility was plagued by misfortune and mismanagement, leading to its abandonment in the late 1990s and its subsequent demolition. The site is now a parking lot owned by UAB. 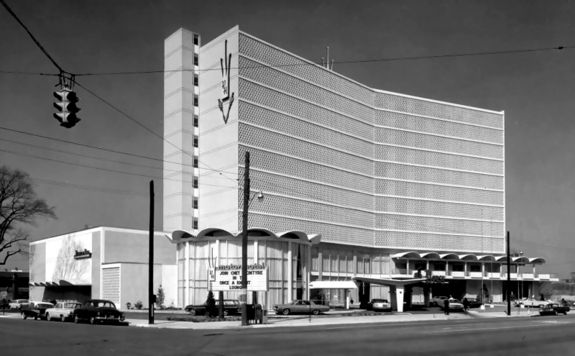 The dramatically-modern structure was constructed $5 million for a group of investors led by James Lane of Huntsville and William D. Sellers, chairman of Baggett Transportation Company. The need for a large hotel in the emerging medical center was obvious and attracted an investment group that included actress Doris Day to lease and operate the planned facility. Brice Building Company commenced construction of the expressively-modern lightweight concrete structure in 1962. The nearly-completed building was lit up with colored neon on December 15, 1963 and opened for guests on January 2, 1964.

Day's group, which would have named the building the Birmingham Cabana backed out during the nationally-televised racial tensions which marked the Civil rights movement in Birmingham. Instead Ned Eddy and his sons Ned, Jr and James of Kansas City purchased the hotel while it was under construction as the crown of their Parliament House chain, which also had locations in Orlando and Clearwater, Florida and Augusta Georgia. They gave the property an English royalty theme with the slogan, "Built for the House of Lords...priced for the House of Commons."

Half a million dollars was spend equipping the central kitchens with state-of-the-art stainless steel appliances and fixtures. Guest room telephones were among the first to feature direct room-to-room calling and a flashing message light. Higher-priced "Council Rooms" featured an in-room bar and two convertible beds that could be folded into sectional seating for social gatherings. The 11th floor featured a "Prime Minister's Suite"

In addition to guest rooms the hotel offered a swimming pool on a raised terrace, the Baron of Beef restaurant, two lounges (the Once a Knight and Baron's Cork Room), banquet and facilities for up to 800 diners, and a row of retail shops. Fred Batzinger, formerly of the Fontainebeau in Miami Beach, served as catering manager.

Until the completion of the Hyatt House at the BJCC, the Parliament House served as downtown's premiere contemporary hotel, hosting celebrities such as Richard Nixon, Bob Hope and O. J. Simpson. In July 1968 young army Major Colin Powell took his wife, Alma to the Parliament House for a last night out before his second tour of duty in Vietnam.

The presence of the hotel spurred development of "The Strip", a row of restaurants and nightclubs across 20th street with Michael's, Rossi's, PJ's Lounge, and Emil's Cantina.

By 1965 Eddy's group was in financial straights and the operator declared bankruptcy. Lane and Sellers regained control and hired Tom Kelley to manage the property. When Sellers decided to leave the hotel business in 1972 the partners put the building up for sale. It was purchased for $4.5 million in June of that year by a group of Pensacola, Florida investors who incorporated as Alabama Parliament House, Inc. They kept Kelly on as manager and ran the hotel for two years until selling it to another Pensacola native, E. A. Gregory.

At one point in the mid-1970s the Ku Klux Klan demonstrated outside the hotel, upset because it allowed a black organization to rent one of the banquet rooms.

For nine months in late 1974 and early 1975 the hotel was managed by television personality Cliff Holman, who had been sales manager during Kelley's term. In "Cousin Cliff: 40 Magical Years in Television," writer Tim Hollis described the Parliament House as "the Alabama Theatre of hotels."

In January 1975 two waiters at the Baron of Beef shot each other to death, apparently while arguing over a $20 tip. Nevertheless, occupancy was high and the hotel seemed successful. Gregory had his own misfortunes, however, and put the hotel up for sale in 1977. He was later convicted in Mobile on nine counts of conspiracy involving the Wilcox County Bank at Camden. Meanwhile the new owner, Palmer G. O'Barr sought bankruptcy protection after only three months of owning the property. He was evicted by creditors in April and the building was once again on the market. 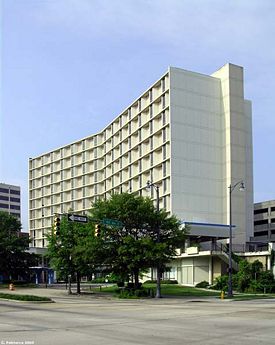 HJK Limited, a partnership of construction company president Denson Hinton and hotel operator K. L. Jones purchased the hotel out of bankruptcy in September 1978. They paid $4.5 million and immediately commenced a $2.3 million renovation, planned by Mort Epstein's Design Management and executed by Hinton's construction company. Features of the renovation included a new nightclub built in a former breezeway and the "3rd Avenue Revue", a storefront display of photographs from Birmingham history, all new fixtures in the guest rooms, and a remodeled 800-seat banquet room. HJK hired Josef Haas as general manger. It was dubbed Holiday Inn-20th Place, part of the Memphis-based "Holiday Inn" chain, just before it re-opened in April 1979.

Within a year, HJK defaulted on a loan it had taken out from Morris Development Associates, a company owned by Gary E. Smith. Smith foreclosed on the property and formed City Hotels Limited to operate the hotel. He changed the name to Holiday Inn-Medical Center.

In July 1982 City Hotels filed Chapter 11 bankruptcy a day after various utilities initiated suspension of service. Despite relatively high occupancy rates, the hotel had over $8 million in outstanding debt, including four mortgages. Accountants called in to review the books found haphazard money management, no records of frequent cash payments, and a closet-full of drink vouchers which had drained as much as $10,000 a month from the hotel bar.

The hotel was purchased for $6.1 million by a group of investors led by Frank Spina of Long Island, New York. The group planned $2 million in renovations, including satellite television. For a while it was operated as part of the Ramada Inn chain, then later as an independent hotel. At one point the parking garage behind the building was sold off, leaving the building without any secured parking. 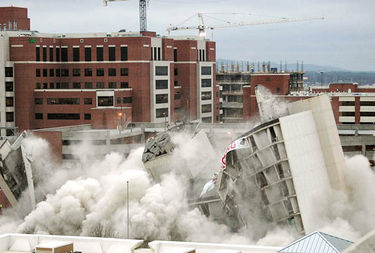 Demolition of the Parliament House in 2008

In the 1994 the Parliament House was refurbished and reopened as Parliament Hotel & Suites with a new restaurant and bar (Cafe 420). An 880-space parking deck built behind the hotel as part of the Southside Station mixed-use development was intended to serve the hotel. Artists from City Stages who were booked at the newly-reopened hotel found the rooms to be small and insufficiently refurbished.

In 2001 Bedrock Partners of Dallas purchased the hotel from SouthTrust Bank for $3.2 million with plans to spend $15 million converting it into a Marriott Courtyard. The City of Birmingham approved a float loan of $600,000 to Crestline Capital Corporation to assist with the project, but the plans never moved forward. The building was put up for sale with a covenant restriction against using it as a hotel.

In June 2006 the building was purchased for $3.7 million by the UAB Educational Foundation as a site for future expansion of the university. After explaining how the newly-exposed side of the parking deck would be addressed, UAB's application for a demolition permit was approved by the Birmingham Design Review Committee on September 26, 2007. Demolition began in late 2007 and was punctuated by an implosion of the concrete structure just after 7:00 AM on Sunday, February 17. The former hotel site is now the home of the UAB Proton Therapy Center.