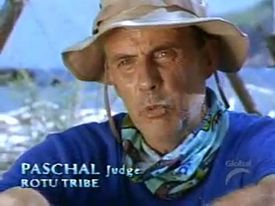 Paschal English (born March 5, 1944 in Birmingham) is a Superior Court Judge in the Griffin Judicial Circuit in Georgia. In 2002, he was a contestant on CBS' Survivor: Marquesas.

English's family moved to Atlanta, Georgia when he was 2. A graduate of University of Georgia, English was a member of the United States Air Force from 1969-1973, serving in Southeast Asia from 1971-1972. After leaving the Air Force as a Captain, he joined the Georgia Air National Guard where he retired in 1998 as a Colonel. Prior to his appointment in 1987 as a Superior Court Judge, English served as Chief Assistant District Attorney for 12 years.

On Survivor, English made it to the final four for his season. Due to a tie, he became the only contestant in the history of the show to be eliminated without having a single vote cast against him. He and two other contestants had to pick stones out of a bag, and he picked the "purple stone of death".

English lives in Thomaston, Georgia with his wife Beverly. They have two sons.