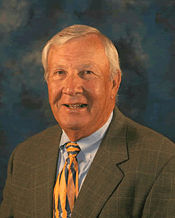 Patrick Fain Dye (born November 6, 1939 in Blythe, Georgia; died June 1, 2020 in Auburn) was a college football coach most notable for his tenure as the head coach at Auburn University from 1981 until 1992. With a career record of 153-62-5 over nineteen seasons as a head coach, Dye was inducted into the College Football Hall of Fame in 2005.

In addition to the first meeting at Auburn, Dye was the opposing coach in 1981 when Bryant, his mentor, won his 315th career game to break the all-time victory record (as it stood at the time) held by Amos Alonzo Stagg. The next season, led by freshman running back Bo Jackson, Auburn rallied for a 23-22 victory, the Tigers' first over the Tide since the famous "Punt Bama Punt" game of 1972. It also turned out to be Bryant's final regular season game, as he announced his retirement three weeks later.

In May 2020 Dye was hospitalized with symptoms of renal failure. During his stay he was diagnosed with COVID-19, but did not suffer other symptoms of that disease. He was moved into hospice care in Auburn, and died on June 1. He was survived by his partner Nancy McDonald, and by four children and 9 grandchildren.