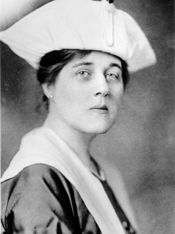 Pattie Belle Ruffner Jacobs, sometimes Patti or Patty (born October 2, 1875 in Malden, West Virginia; died December 22, 1935 in Birmingham) was a social activist and a leader in the women's suffrage movement.

Pattie, the daughter of Lewis and Virginia Ruffner, was born in October 1875 in Kanawha County, West Virginia, and moved with her family to Nashville, Tennessee as a young girl. She was educated tjere Ward's Seminary, but was unable to continue her studies there during the economic crisis of the 1890s. Her parents' marriage dissolved in that period and Pattie moved with her mother to Birmingham to stay with the family of her older sister, Bertha. She graduated from the Birmingham Training School for Teachers and spent some time studying art and music in New York City before returning to Birmingham.

Ruffner married Solon Jacobs, one of the founders of the Birmingham Slag Company, in 1898. The couple had two children, Madeline and Virginia. Mr Jacobs encouraged his wife's participation in progressive social and political movements. He supported her travel to national conferences and provided means for her to solicit persuasive essays and to distribute literature. She was most active in campaigns against child labor, convict leasing, and prostitution which were all endemic in the Birmingham District. She was also an active member of the Salvation Army and the Jefferson County Anti-Tuberculosis Association.

It was after several failed efforts toward improving public schools, that Jacobs concluded that women's suffrage was necessary in order to achieve social reforms through the political process. She founded the Birmingham Equal Suffrage Association (BESA) in 1910, followed by the Alabama Equal Suffrage Association (AESA) a year later. She served as president of the statewide organization from 1912 to 1916, establishing its headquarters office in downtown Birmingham.

In 1913, Jacobs spoke on behalf of Southern women's suffragists at the Annual Convention of the National Woman's Suffrage Association in Washington D.C. She and her colleagues encouraged women in Alabama to speak out, and also staged "voiceless speech" demonstrations where volunteers sat in shop windows holding suffragist pamphlets to be read by passersby. The group collected more than 10,000 signatures on a petition and nearly succeeded in putting a statewide suffrage referendum on the ballot in 1915. Opponents, however, played up fears that giving women the vote would increase the political power of African Americans and blocked the measure. Following the setback, AESA turned its efforts toward promoting a national suffrage amendment.

Jacobs was elected as an officer in the National American Woman Suffrage Association (NAWSA) in 1915 and served as its second auditor from 1916 to 1918. As part of the Congressional Committee she actively lobbied in the U.S. Capitol. When the United States entered World War I she volunteered her services as head of the Alabama division of the National Woman's Liberty Loan Committee, which promoted the sale of Liberty Bonds. Having returned to Birmingham, Jacobs resigned from the NAWSA and resumed leadership of the AESA. Once the 19th Amendment was passed in 1920, she guided the transition of the AESA into the Alabama chapter of the League of Women Voters. She was elected national secretary for the League of Women Voters.

Jacobs led efforts toward other socially-progressive laws, as well, such as a failed attempt to establish an 8-hour work day. Presidents Herbert Hoover and Franklin Roosevelt recognized her leadership with appointments to various commissions, such as the Consumer Advisory Board of the National Recovery Administration and as a spokeswoman for the Tennessee Valley Authority. In 1933 she was the first woman appointed to the Democratic National Committee from Alabama, a position she held until her death from a heart attack two years later.

Jacobs is buried at Elmwood Cemetery.