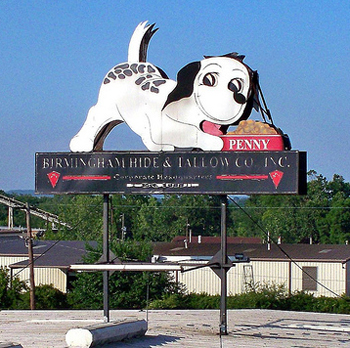 Penny is the name of the canine mascot for the Gold Seal Dog Food company, depicted on an animated sign extending over the roof of their headquarters which was visible from the 1st Avenue North Viaduct until it was restored and moved to Regions Field in 2013.

When Birmingham Hide and Tallow purchased the property in the 1980s. Employee Christy Crick convinced CEO Owen Vickers to refurbish the sign in 2005. Barry Crick, who also maintained Vulcan's neon lighting, performed the restoration work and added the company's name to the bottom panel. The restoration won a "Preservation Award" from the Birmingham Historical Society.

Birmingham Hide and Tallow moved its offices in 2010, but left the sign up. In 2013. Its corporate counsel, Micah Salsman, suggested to CEO Owen Vickers that they refurbish the sign and donate it to Regions Field. They hired Wide Open Signs to refinish the painted illustration and Mark Whiten of Whiten Signs n' Lighting to restore the mechanism.