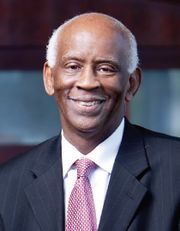 Ward was born at home and grew up in the Southtown Court public housing project. His father, Fred, worked for the the Housing Authority. He attended Ullman High School, and participated in the Children's Crusade during the 1963 Birmingham Campaign, as well as volunteering as a "street watcher" to guard against racially-motivated bombings and other terrorism.

After graduating in 1964 he enrolled at Miles College. He completed his bachelor's degree in sociology in 1968 and took a job as a job developer and community organizer for the Birmingham Urban League. He went on to complete a master's in social work and a PhD from the University of Alabama. He also married and had a son, Perry Jr. He married his second wife, Ann in 1973 and had two more sons; Adrian and Stephen.

In February 1975 Ward began working for Birmingham City Schools. In 1987 he was encouraged to apply to succeed Jesse Lewis as president of Lawson State. He was one of 60 applicants and was hired at the recommendation of Alabama State Board of Education vice president Ethel Hall.

Ward began his tenure on June 12. As president he oversaw a fivefold increase in enrollment, and the merger of Lawson State with Bessemer State Technical College on July 1, 2005. Washington Monthly named Lawson State one of the top five community colleges in the United States in 2013. The college hosted a visit from President Barack Obama in March 2015. The school's work to cultivate online programs gave it a head start with distance learning during the 2020 Coronavirus pandemic.

Ward was appointed to the Red Mountain Greenway and Recreational Commission by Mayor Bernard Kincaid in 2007. He has also served on the board of the Birmingham Education Initiative.

After 33 years, Ward announced his retirement effective August 31, 2020. He made plans to learn to race his 2019 Corvette C7, to play some golf, to volunteer with Habitat for Humanity, and to complete projects around the house, including a model train.