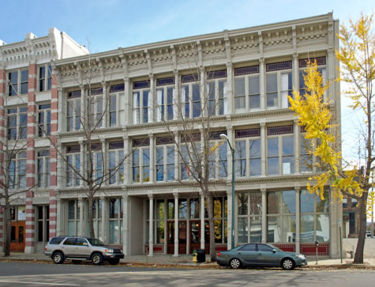 Peter Zinszer's Mammoth Furniture House (sometimes spelled Zinzer) was a furniture dealer located in the Zinszer Building at 2115-2117 2nd Avenue North. It was founded on March 15, 1884 by Peter Zinszer, who moved to Birmingham with his wife, [Rosa Zinszer-Wilder|Rosa]] and young son Joseph from Louisville, Kentucky earlier that year.

The business sold furniture, carpets, stoves, and household items, delivered by mule-drawn carriage to all parts of the city. As the first large furniture dealer to set up in the city, Zinszer's was considered a pioneer Birmingham business. Zinszer quickly found success, largely on the effectiveness of offering credit to customers who could pay for purchases on installment plans. In 1889 he constructed a massive three-story store with a modern cast-iron and glass facade.

By 1894 Zinszer's Mammoth Furniture House maintained its "Time House" for credit purchases in the Zinszer Building, as well as a smaller "Cash House" two blocks away at 1917 2nd Avenue North. Zinszer fell ill later that year and and died in late 1895. Rosa continued to operate the store as one of Birmingham's prominent business women. In 1904 she married Dr W. H. Wilder and went by Rosa Zinszer-Wilder professionally. The store was managed by A. G. Miller with Joseph Zinszer as buyer.

Zinszer's was later taken over by Beard Furniture. After that business closed, the storehouse, considered to have the finest of the two surviving examples of Victorian cast-iron facades in Birmingham, was converted into an office building. It was added to the National Register of Historic Places on October 23, 1980.