This article is about the downtown warehouse. For retail building in Lakeview, see Pheonix Building (Lakeview). 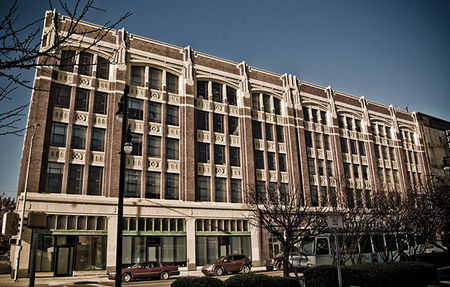 The Phoenix Lofts (formerly the Phoenix Building) was originally built in 1926 as a large warehouse building on the site of the former Orr & Lanning livery stables on the northeast corner of 17th Street and 2nd Avenue North (Block 88).

In the 1930s the ground floor tenants included a penny arcade, the Friedrik Sales Corporation, and a space listed as "Future Alabama News" on 17th Street. There was a café at the corner, and the Birmingham Leather Company, a cash register company, Lamar Insurance, and the building entrance on 2nd Avenue. In 1933, the Phoenix Bowling Center opened in the basement of the Phoenix Building. It is agreed that this was the first regularly used bowling center in Birmingham.

In 1943 Newman Waters, Sr purchased the Phoenix Building as he diversified the holdings of the Waters Theater Company. In June 1945 Ervin Jackson & Associates purchased the property from the Metropolitan Life Insurance Company of New York.

In the late 1940s, the South Central Bell signed a lease with the owners of the building which necessitated a major expansion. The deal is believed to have been the longest warehouse lease signed in the city. The building was extended over the site of the Jefferson Theatre, which was demolished in 1946.

When it reopened in 1950, the building contained 168,000 square feet of warehouse space on five floors, plus ground floor retail tenants. The brick and terra cotta facade grew to extend for a total of 340 feet of street frontage.

BellSouth remained a tenant until 1987, after which the building was left largely vacant. In 2004, Metropolitan LLC commenced a massive renovation of the Phoenix Building, creating 74 lofts with parking, and restoring the terra cotta facade to its original splendor. The project won a Preservation Award from the Birmingham Historical Society, recognizing it as "Alabama's first mixed-income lofts."