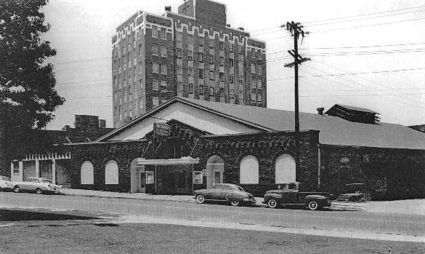 Interior of the Pickwick Club

The Pickwick Club or Pickwick Nite Club was a dance hall and special-event venue located at 2012 Magnolia Avenue adjacent to the Medical Arts Tower near the present site of the Pickwick Plaza shopping center.

The medical office building and the dance hall were both financed by the Kamram Grotto, a fraternal order of Freemasons, and were constructed in 1931. The Pickwick Club was a renovation of an earlier covered parking garage.

During the Great Depression the Pickwick Club flourished as a venue for private parties, weddings, religious revivals, meetings and dances. In the "Big Band" era the stage was graced by numerous swing-groups. A glitter-ball replaced a large ceiling fan centered rotated over the "vibro-cushioned" dance floor, and a mechanical hobby horse attracted daredevils.

Walker Mattison took over management of the club in 1935 and redecorated the interior with a different theme each year.

In the Summer of 1954, the club hosted productions of the Pickwick Players theatrical troupe, which also brought in guest stars such as Eva Gabor and Zero Mostel.

The Pickwick Club burned in the mid- to late-1950s and the site was cleared for parking.