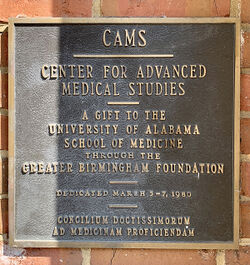 The brick-clad classically-styled building was constructed in 1980 on the site of the former Reynolds Historical Library, which moved into the Lister Hill Library in 1975. The rectangular building was topped with a hipped roof and had a pedimented gable that faced 7th Avenue, with a projecting balcony supported on square columns.

Pittman commissioned a painting, "Medical Giants of Alabama", from Mississippi portraitist Marshall Bouldin to hang in the Pittman Center's lounge. Controversy over the painting's depiction of pioneering gynecologist J. Marion Sims, who performed medical experiments on slaves, led to the painting's removal.

In 2020 UAB announced plans to demolish the building, along with the adjacent Roy R. Kracke Clinical Services Building, to create a staging area for the expansion and renovation of the neighboring Lyons Harrison Research Building as the Altec Styslinger Genomic Medicine and Data Sciences Building. After those projects are completed, the Pittman Center's site would be converted into a green space.

The building was demolished in 2021.