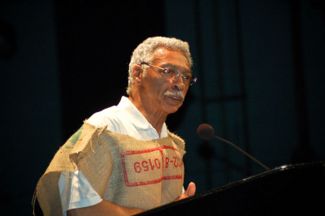 Plan 10/30 is a campaign organized by Birmingham mayor Larry Langford and Frank Matthews of the Mayor's Office of Citizen's Assistance to engage community leaders to reduce violent crime in the city and the metropolitan area.

Through a series of public rallies at Fair Park Arena, the campaign seeks to encourage residents to take personal responsibility for the "culture of lawlessness" in the community. It is modeled after a similar initiative in Philadelphia, Pennsylvania. The name reflects that fact that most violent crimes are committed by black males between the ages of 10 and 30.

Approximately 3,000 African-American men attended the 2-hour kick-off rally, entitled "Why am I dying? Do you care?" Non-blacks and women were excluded from the event, as were representatives of the press. Speakers included Langford, Birmingham Police chief A. C. Roper, Tommy Lewis, pastor of Bethel Baptist Church Pratt City, former pro-athlete Bo Jackson and two inmates from the St Clair Correctional Facility. The rally was preceded by a gun buy-back sponsored by the Birmingham chapter of the Southern Christian Leadership Conference.

A second rally, "Leap Up to the Challenge" was held on February 29 for African-American women. Featured speakers included Melva Langford, Rachel Arrington and Carole Smitherman.

A third rally, "Remember the Dream. Restore the Family" was held on April 4 the anniversary of the murder of Martin Luther King, Jr. All families were invited ("black, white, blue, green, whatever") to the rally in which Mayor Langford announced that "only God can change hearts." O. C. Oden of Antioch Missionary Baptist Church in Fairfield, and Calvin Woods, president of the metropolitan Birmingham chapter of the Southern Christian Leadership Conference, led 1,100 attendees in a "service of renewal." Thousands of Christian Bibles donated by Pat Robertson's 700 Club were distributed at the event.

For the fourth rally, held at Boutwell Auditorium on April 25, Langford provided 2,000 burlap bags which were worn by attendees as a show of humility, mourning and penitence and to increase the chances that God will hear their prayer.

On April 22, 2008 Langford issued a proclamation on city letterhead proclaiming April 25 to be "It's Time to Pray" Day in the City of Birmingham. He called upon "all Bishops, Priests, Pastors, Ministers and all of our citizens of various denominations and creeds" to join him in donning burlap sacks and having their heads smeared with ashes during a prayer rally at Boutwell Auditorium. The display was intended to show humility and restore God's favor to a city wracked with violence. Anticipating complaints from defenders of the 1st amendment's establishment clause, Langford stated that "the Constitution of the United States calls for a separation of church and state - it never said anything about a separation of church from state.” (Underwood - Apr. 22, 2008)