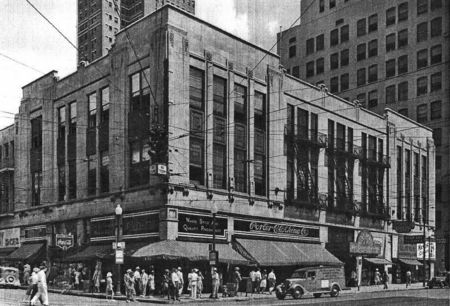 The Porter Clothing Company was a clothing store operating in downtown Birmingham from 1904 to 1963. It was founded as the H. J. Porter & Co. in 1904 by Henry J. Porter was chairman of the board. In 1905 ownership of the company was expanded under the name Porter, Neel & Co.. The original store was located at 1922 1st Avenue North, and was extensively remodeled in 1913.

In 1918 Porter's had stores in Birmingham as well as Jacksonville, Florida (managed by John Porter). That year the company acquired for the former Huddleston-Cooper Co. in Nashville, Tennessee, which was managed by Alf W. Porter. It also began awarding the Porter Cup to the "best all-around athlete" from major Southern universities. Howard College's Claud Carr was the first recipient.

On February 1, 1922 the chain opened a new 14,000 square foot store in New Orleans, Louisiana. Alf Porter relocated to New Orleans to manage the store. The Birmingham store was extensively remodeled beginning on February 1, 1924. The store reopened in May with new marble flooring, improved electric lighting, and new store fixtures. The main floor displayed men's furnishings with suits and overcoats on the second floor and boy's clothing sharing space with the company's offices on the third floor.

In 1927 the store moved to a new building on the southeast corner of 20th Street and 3rd Avenue North. Porter's occupied the prominent corner space in the building until the store closed in 1963.