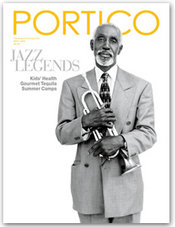 Portico is a monthly lifestyle magazine, launched in 2002 for the Birmingham area. It claims a total readership of 65,000. The executive editor is Abigail Millwood. The magazine is published by Open Gate Media and distributed by subscription home delivery and through local newsstands.

Fulfilling its niche as the area's only pure-lifestyle magazine, Portico features regular columns subtitled "What To Do", "What To Read", "Where To Eat", and an interview column in the format of "10 Things I've Learned..."

A second publication, Portico Student also launched in 2006, distributed to schools nationwide and claiming a total readership of 1,840,000. Portico Student solicits content from students and returns subscription fees to the schools and students who sell subscriptions.