The Preston Motors Corporation was organized in 1919 to manufacture automobiles in Birmingham. R. A. Skinner was president and chief engineer. With $1,000,000 in capital, the company built its Preston Motors Plant No. 1 on Vanderbilt Road at 18th Avenue North (near the present Tallapoosa Street exit off I-20/59) where it built five-passenger touring cars.

Preston Motors Plant No. 2 opened in 1921 on the northwest corner of 27th Avenue and 24th Street North in North Birmingham. The second plant accommodated production of a 6-cylinder roadster. 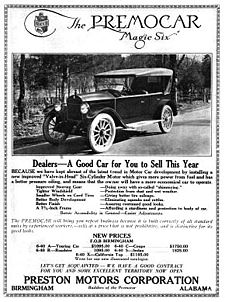 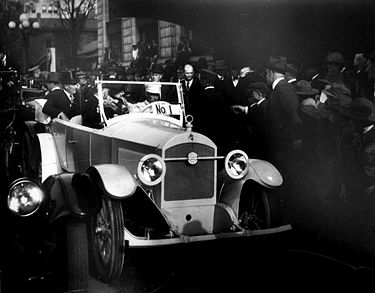 President Harding in a Premocar touring car in 1921

The carriage bodies were fabricated by hand in Birmingham, using kiln-dried wood with mortised and glued joints, braced with iron. The standard color was maroon with cream-color wheels, but custom colors were available as an option. Because it was built on the same 117" wheelbase chassis, the roadster had a roomy rear compartment which could enclose steamer trunk under the fold-down roof.

During his 1921 visit to Birmingham, President Warren Harding was chauffeured around the city in a white-painted 1921 Premocar Touring Car. The 1922 models featured an improved "Magic Six" valve-in-head motor. 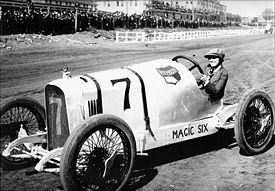 A Premocar "Magic Six" racing car on the track

Premocars were priced higher than comparable products from other manufacturers, limiting demand. It is estimated that only about 300 vehicles were ever produced by the company (none of which survive). The company fell into receivership and closed in 1924.

The company's former plant on Vanderbilt Road was redeveloped in 2019 as the "Premo Factory", housing manufacturers of architectural and garden products.