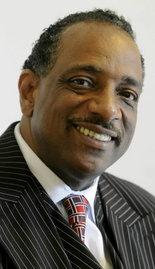 Primus Gregory Mack (born c. 1955) is pastor of Saint Mark Baptist Church in Wylam and owner of Ivory's Day Care at his home on Valley Road in Fairfield.

Mack is a 1973 graduate of Hueytown High School. In 2008, Mack challenged incumbent Vincent Smith for Fairfield City Council District 2 seat, but lost by 12 votes. When Smith retired in January 2011 the Council voted 4-0 to appoint him to the vacant seat. As a member of the council, Mack called for lowering sales taxes and providing incentives to recruit new businesses to the downtown district.

In September 2011, Mack's granddaughter accused him of groping and kissing her at his home the previous June. He was convicted of child enticement and second degree sexual abuse in January 2014. By virtue of the felony conviction he was removed from the City Council. Gloria Matthews completed his term.