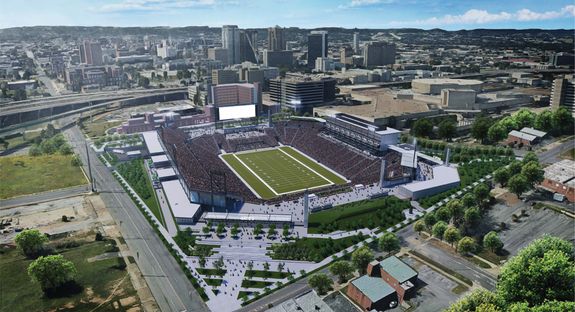 Architectural rendering of Protective Stadium, as seen from above and from the north.

Protective Stadium is a 47,100-seat open-air stadium adjacent to the Birmingham-Jefferson Convention Complex north of I-59/20 in downtown Birmingham. It hosts home games for the UAB Blazers football team, Birmingham Legion FC, as well as the annual Birmingham Bowl. Every third year the stadium hosts the AHSAA "Super Seven" high school football championship.

The BJCC Authority's proposal to move forward with an open-air stadium, after years of unrealized proposals for a domed stadium or "multi-purpose stadium", was announced in August 2016 as part of the BJCC's updated master plan, commissioned from Populous architects of Kansas City, Missouri. The $179 million stadium is part of an overall $300+ million renovation and expansion of the overall complex.

In his 2017 State of the City address, Birmingham mayor William Bell alluded to a $200-225 million projected cost for an open air stadium and a $450 million-plus cost for an enclosed stadium, which he would prefer. He hoped to secure a public-private partnership to finance the larger project and said that an announcement could be expected "fairly soon." Bell's defeat in the 2017 Birmingham municipal election effectively ended those efforts.

By the end of 2017, the BJCC Authority projected being able to cover an additional $10.7 million per year from its own revenues to service new debt for improvements. The Jefferson County Commission voted in January 2018 to commit to $1 million a year for 30 years as its contribution to debt service on the proposed new facility. New Birmingham mayor Randall Woodfin requested that the City Council commit $3 million a year for 30 years as an investment in revenue-generating infrastructure. The Birmingham City Council approved that proposal, with a stipulation that "revenues" from the BJCC expansion would go into a Birmingham Neighborhood Revitalization Fund, on March 27. UAB and corporate partners have also committed $4 million a year, part of which includes leasing the stadium, along with sponsorship deals and naming rights.

In consultation with the BJCC Authority, one of the primary goals for Populous' 2016 Master Plan was to "investigate the development of a 45,000 seat open air NCAA football stadium to host UAB and multiple bowl games as well as the Magic City Classic", and for the stadium to be, "capable of accommodating 10,000 additional temporary seats." As illustrated in their resulting report, the new stadium would be located on the four-block area between Richard Arrington Jr Boulevard North and 12th Avenue North, and between 22nd and 24th Streets. Its main entrance, facing south, would open onto a large open "event plaza" flanked by retail/restaurant strips serving as an extension of the Uptown entertainment district. Luxury suites and press areas would be clustered on the west side of the stadium, accessed from a "VIP entrance" and from a sky bridge connecting to the BJCC's East Exhibition Hall near the Alabama Sports Hall of Fame. The 10,000 additional "temporary" seats would extend above the top rows of the 45,000-seat concept. An image distributed by UAB after the Birmingham City Council vote featured a more detailed rendering of a proposed stadium for Colorado State University superimposed in front of Birmingham's skyline under the heading "Dreams Become Reality".

Financing for the stadium and arena expansion was obtained through the BJCC's sale of bonds on July 18, 2018. Ground was ceremonially broken for the new facility on Thursday, December 13, 2018. Actual construction is anticipated to begin in late summer or early fall 2019. The site plan and conceptual design of the stadium were approved by the Birmingham Design Review Committee in June 2019. Exterior materials and landscaping were approved on September 11.

It was announced on April 11, 2019 that the Protective Life Corporation had secured naming rights for the stadium for 15 years at a cost of $1 million per year. In August, Terance Perrine launched a website and social media campaign to criticize the preliminary stadium design for having too few seats on the home side. A more detailed design presentation to the BJCC board in September 2019 showed that the 42,000 "physical seats" would break down as 13,937 on the "west side bowl", 10,139 on the "east side bowl", 9,144 in the eastern upper deck, and 5,825 in the end zones. Another 537 would be accommodated in 31 indoor luxury suites and 13 reserved "cabana" suites. Additional general admission tickets could be sold for "seating" in lawn areas behind the end zone bleachers or in concourse level "clubs" for a total capacity of 45,000. General admission areas will have access to 310 women's lavatories, 158 men's lavatories and 9 family lavatories. The stadium is equipped with five locker rooms, including a full-time UAB Blazers football locker room. At the time of the presentation the field surface material had not been determined.

Brasfield & Gorrie was awarded the $179 million construction contract on December 20, 2019. In May 2020 the BJCC announced that it had decided on an artificial surface designed to allow for covering the field with natural sod for specific events. During construction, the contractor proposed installing additional fixed seating over part of the planned lawn seating area, adding a net 1,200 seats to the stadium's capacity at no extra cost.

The stadium concession contract was awarded to Centerplate division of the French company Sodexo.

The first event held at the new stadium was UAB's home opener against Liberty University on October 2, 2021.

In November 2019 it was announced that the Alabama High School Athletic Association "Super 7" football championships would be played at Protective Stadium in 2021, 2024, 2027 and 2030.

The delay of the World Games from 2021 to 2022 due to the effect of the COVID-19 pandemic on the 2020 Tokyo Olympics made the stadium available as the site for opening and closing ceremonies and other events.

The Birmingham Bowl was moved from Legion Field and the venue saw its first sell out as the Auburn Tigers played Cincinnati in the 2021 Birmingham Bowl.

In late 2021 it was announced that the Birmingham Legion FC would play home matches at the stadium beginning with the 2022 season.

In 2022, the new incarnation of the USFL played 8 of 10 weeks in the stadium. Due to stadium conflicts, the other 2 weeks of the regular season were played at Legion Field and the play-offs were played at the Pro Football Hall of Fame in Canton, Ohio.