From Bhamwiki
(Redirected from Ramsay-McCormack Building)
Jump to: navigation, search 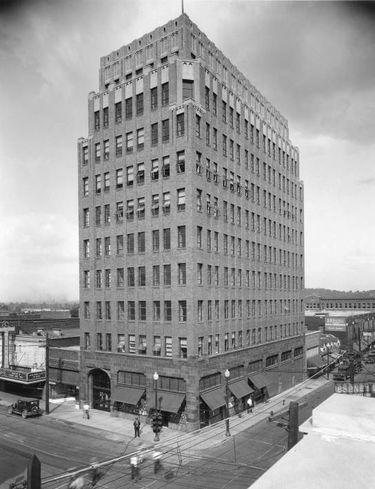 The Ramsay-McCormack building, also known as the Bank of Ensley building or United Security Life Building, was a 10-story, 144 foot tall art-deco style office tower completed in 1929 on the corner of Avenue E and 19th Street Ensley in downtown Ensley. It was demolished in October 2020 for redevelopment of the site.

Investment partners Erskine Ramsay and Carr McCormack of the Ramsay-McCormack Development Company announced the project in 1926 as a 6-story, $200,000 office building. It was built on one of four blocks they had purchased from James C. Warner, winner of the auction of former Ensley Land Company properties in 1898. The corner lot was the former site of the Ensley Hotel and the Fields & Goodwin Drug Store. It was designed by architect Brooke Burnham.

At Ramsay's suggestion, the 50-foot by 100-foot building was expanded to 10 stories during construction and also includes a two-level mechanical penthouse and a full basement. Flooding of the foundation caused delays in the first stages of construction. The top floor is set back 5 feet all around with a balcony. The structure is formed of a cast-in-place concrete frame with perimeter columns and one row of interior supports. The frame is filled in with structural clay tile walls and clad in beige brick. The ground floor is trimmed with brown granite and terra cotta. Additional terra cotta details ornament the window surrounds and the roof parapet. The lobby has marble floors and walls and a barrel-vault coffered plaster ceiling. The building contains three elevators and one stair.

The Ramsay-McCormack building housed the Bank of Ensley on the ground floor as well as the developer's offices and local offices for U. S. Steel. Fields & Goodwin returned to the building after completion. The tenant spaces were never completely leased. Rumors that the Tennessee Coal, Iron and Railroad Company might relocate from Birmingham's Brown-Marx Building never materialized. At some point, a large illuminated five-pointed star was erected on the elevator penthouse as a Christmas decoration.

In the 1950s the building was named for the United Security Life Insurance Company, which occupied offices on the 6th, 8th, 9th and 10th floors. 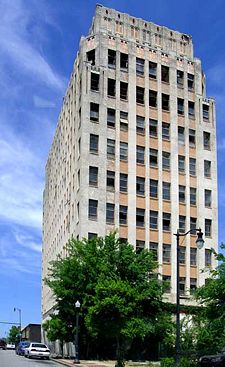 Photograph of the tower in May 2010 by Chris Patriarca

Despite a 1970 renovation, the closure of U. S. Steel's Ensley Works left much of the tower vacant. The building's doors were closed in 1979 and after an unsuccessful offer from James Parker, it was acquired by the City of Birmingham for $1 in 1983. The Ramsay-McCormack Building was listed on the National Register of Historic Places in 1984. In 1985 Parker made another purchase offer for $184,662, about $40,000 less than the city's 1982 appraisal. Mayor Richard Arrington, whose administration approved the offer without taking bids, was then a partner with Parker in Chapel Funeral Service. Ultimately the sale was not completed.

In 1998 Birmingham funded a feasibility study for possible renovation of the building which was proposed by the Ensley Community Issues Forum and the Bethel-Ensley Action Task. ArchitectureWorks prepared the study, which found the underlying structure to be sound, but also documented numerous deficiencies in the soundness of the roof and balcony levels, and in the provision of egress stairs. Asbestos was found in some of the interior finishes and in pipe insulation throughout the structure. The study recommended low-income housing as the best use of the building and developed preliminary plans to be priced. Stone Building Company estimated that the project as drawn could be completed for $4.65 million. Censeo, Inc then performed a financial analysis to detail funding options. They determined that if the market for housing was sufficient and if a variety of tax credits, loans and grants were secured, that the project could be funded. The proposal, however, did not move forward.

As the structure continued to deteriorate over the ensuing decade, the Alabama Trust for Historic Preservation added the structure to its "Places in Peril" list for 2008. In Spring of the same year New York-based development group Veristar Holdings made a $12-14 million proposal to convert the former office tower into 45-50 apartments for seniors. Under an agreement approved by the Birmingham City Council's Budget and Finance Committee the city would remove lead and asbestos and then sell the building to Veristar. When that proposal failed, attorney Antonio Spurling filed a lawsuit against the city for failing to adequately maintain the property. He dropped the suit when a city attorney promised him that renovations would proceed. Mayor William Bell has said that such renovations were a priority for his administration, but if no deal could be reached, the city would tear it down to open the way for more suitable redevelopment.

In 2009 attorney Antonio Spurling filed a lawsuit seeking to force the city to either restore or demolish the building. He dropped the suit when the city pledged to initiate redevelopment and appropriated $900,000 to those efforts. With no tangible results of that pledge, Spurling joined with the Ensley Revitalization Committee, Hope International and Playover Games & Movies in a 2012 suit which called for demolition of the vacant tower and damages for neighboring property owners. At the same time, Operation New Birmingham/Main Street Birmingham was negotiating with the city to spend about $808,000 in additional public money to abate hazardous materials, stabilize the exterior and install a new roof as part of efforts to market the property.

On November 30, 2016 Mayor William Bell announced that the building would be renovated as part of a $40 million project to create a Birmingham Public Safety Complex combining the Birmingham Municipal Court, Birmingham Police Headquarters and Birmingham Fire and Rescue Service administrative offices along with green space and new retail and residential projects to be developed by the Bethel-Ensley Action Task non-profit. Just two days after Bell's announcement, Judge Mike Graffeo issued an order requiring the city to demolish the building in a ruling in Spurling's 2012 lawsuit. Mayoral spokesperson April Odom indicated that Bell would proceed with the Public Safety Complex with or without the historic building as part of it. Plaintiffs later asked Graffeo to revise his order to require that the city should begin renovation work by February 10, 2017 and complete the renovations within two years.

A February 3, 2017 preliminary space planning study by ArchitectureWorks indicated that new additions to the existing structure would be required to house either Birmingham Fire and Rescue Service administrative offices or Birmingham Municipal Court functions along with modern egress stairs. That study, which did not include any cost estimates or biddable construction documents, was submitted to Judge Graffeo in an attempt to satisfy his order for work to begin. In April, a cost estimate for the building's rehabilitation suggested a budget of $12-14 million.

Incoming Mayor Randall Woodfin cancelled the plans for developing a public safety complex around the building. He did submit an $83,500 item which was approved by the City Council to remove windows and other dangers to the surrounding sidewalks. The city solicited proposals from private developers for renovation plans beginning in August 2018. In November of that year the city rejected all the proposals it had received and prepared to revise its request. A second RFP was initiated in February 2019. From that process, Ensley District Developers was selected to proceed with preliminary plans that would qualify for additional city funding to carry out.

In April 2020 it was announced that structural surveys of the building had determined that it had deteriorated beyond the point that renovation was feasible. The developers proposed demolishing the tower and building a 4-story, pedestrian-friendly mixed use building on the site, to open in 2022. Charles Williams & Associates was commissioned to design the new building for Ensley District Developers. Innovation Depot, Birmingham Promise, and the Birmingham Office of Business Diversity and Inclusion all signed on as tenants.

Demolition of the upper floors began in October 2020, and the remainder of the structure was brought down by controlled explosive charges on April 13, 2021. Nearby business owners were caught by surprise as the timing of the implosion had only been communicated to attendees of an online meeting two days prior. Brian Rice, who was in the process of redeveloping several nearby properties and was president of the Ensley Business Alliance, complained to the Jefferson County Department of Health about the potentially hazardous cloud of debris hanging in the air.