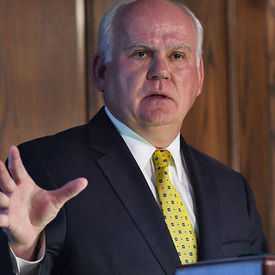 Ray Lannom Watts (born 1953 in Birmingham) is the President of the University of Alabama at Birmingham (UAB).

Watts grew up in West End and graduated at the top of his class at West End High School. He earned a full scholarship to UAB and began studying electrical engineering before switching to biomedical engineering before completing his bachelor's degree in 1976. He went on to medical school, and was valedictorian of his class at the Washington University School of Medicine in St Louis, Missouri in 1980. He completed his residency in neurology at Massachusetts General Hospital. There he met his wife, Nancy, a nurse.

Watts then served a 2-year fellowship at the National Institutes of Health and joined the faculty of Emory University in Atlanta, Georgia. He participated there in the establishment of a Parkinson's Disease and Movement Disorders Research and Clinical Center. He and Nancy raised five children.

Watts returned to Birmingham in 2003 as the John N. Whitaker Chair of Neurology and served as chief of neurology services for UAB Hospital, where he helped create the UAB Comprehensive Neuroscience Center. He also served as president of the University of Alabama Health Services Foundation and as interim CEO of UAB Health System during most of 2008.

In July 2010, Watts was named senior vice president for medicine and dean of the UAB School of Medicine. The University of Alabama Board of Trustees named him president of the University on February 8, 2013. Over the next two years he supervised a long-term strategic planning process that led him to conclude that the UAB Blazers football program made unsustainable financial demands on the University. He announced the termination of the program, along with women's teams in bowling and rifle, in December 2014. The decision was apparently foreseen by UAB, which pursued only short-term football-related contracts for the previous year. Watts' handling of the process was widely criticized and resulted in public and on-line demonstrations calling for him to step down. The UAB Faculty Senate voted to consider a resolution expressing their lack of confidence in Watts' presidency.

As president, Watts has overseen major growth in undergraduate enrollment, part of which he credits to the university's ability to offer undergraduate degrees in specialties such as neuroscience, immunology and cancer biology.