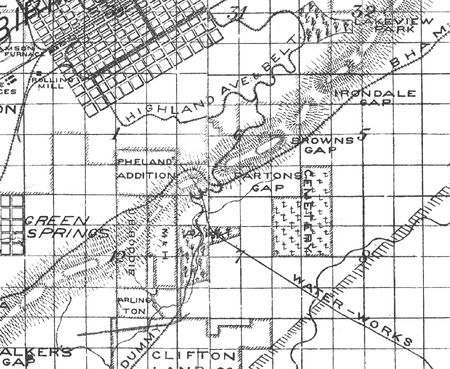 Red Mountain Cemetery (also known as Southside Cemetery) was a cemetery used between about 1888 and 1909, on a 200-acre parcel, owned by the City of Birmingham and later dedicated as Lane Park. The park later became the site of the Birmingham Zoo and Birmingham Botanical Gardens.

The property which became Lane Park was assembled from three parcels on the South slope of Red Mountain. The land was originally granted by the United States to military veterans William Pullen and Joseph Byars in 1822 and 1855 respectively, and held by their successors. At the direction of Mayor A. O. Lane, the first 80 acres was purchased on February 16, 1889 from Ellis Phelan's Irondale Company, followed by 120 acres on August 31, 1896 from William Hickman and Alfred Eubank.

Some burials took place on the property before the city began using it for public purposes in 1888, and before the cemetery was formally dedicated in February 1893. It was located west of Cahaba Road and used as a "potter's field" or pauper's cemetery for victims of disease from nearby pest houses and later for victims of violence, county convicts who were executed, and others who died from disease or natural causes whose families did not arrange for private burial. Some of the burial plots at Red Mountain Cemetery were purchased for individual use, however.

According to a 1905 report by S. F. Cunningham, who served as sexton, the entire 200-acre parcel was "known as Red Mountain Cemetery", but was mostly forested, with the cemetery itself confined to about six acres in the southwest quarter of section 7, township 18, range 2 west and along the property's western border. The property also housed a smallpox hospital, a small rock quarry from which curbstones for city streets were obtained, and two "fine and never failing springs". The Jefferson County Anti-Tuberculosis Association established a "Fresh Air Farm" on the eastern edge of the property in 1910, despite resistance from residents of nearby suburbs. The pest houses burned during World War I and were not re-built.

The city's public use of Red Mountain Cemetery continued until 1909, with most deaths over the period certified by doctors holding the office of Birmingham City Physician. Eventually most of the burials were undertaken by Jefferson County. After 1909 the county transitioned its paupers' burials to a newly-established cemetery in Ketona. Though no later burials were recorded after that year, the Red Mountain or Southside Cemetery continued to appear in City Directories through 1928.

In 1934, at the urging of Mayor George B. Ward, the 200-acre property was "irrevocably dedicated" as a city park, named in honor of A. O. Lane, who had prompted the city's purchase. Ward was quoted as saying, ""As a beautiful breathing spot, its possibilities are even manifest to the ghosts of the pauper dead who now look out on mansions of the millionaire and mayhap grin to think that all things come to those who wait and that the whirligig of time has transmuted their lowly beds into nooks of safety and beauty."1

The Lane Park Arboretum was established on the property through the efforts of the Birmingham Federation of Garden Clubs and the Works Progress Association, which quarried limestone for several projects from a part of the property now located at the north end of the Botanical Gardens. The improvement of the property continued with the creation of the Allan Gray Fish Hatcheries, the paving of Cahaba Road in 1927, a golf driving range and a baseball diamond in the 1930s, and the construction of Lane Park Road in 1939. In later decades the park was transformed with the establishment of the Birmingham Zoo in 1955, and the opening of the Birmingham Botanical Gardens in 1962.

During the construction and improvement of those facilities, grave sites have sometimes been found, including at least three discovered when planting the rose garden at the Botanical Gardens, outside the boundaries of the area described in 1905.