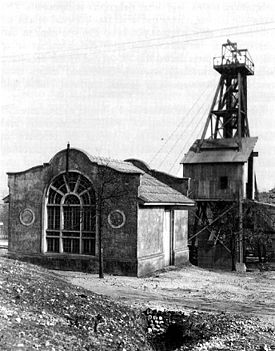 The Redding Shaft is a vertical shaft iron ore mine on Red Mountain which was operated by the Woodward Iron Company from 1917 to 1927. It and Woodward's Pyne Mine were two of the only three vertical shaft ore mines in the Birmingham District.

When the Tennessee Coal, Iron and Railroad Company (TCI) took control of the northern Red Mountain trackage of Birmingham Mineral Railroad in 1917, Woodward's access to its Songo No. 1 Mine, a slope mine originating on that flank of Red Mountain, was hindered. The company sunk a 384-foot deep vertical shaft, 10'-4" x 7'-0" in section, into the southern slope, 1,000 feet away and directly above the active Songo workings. The ore could then by transported by the Louisville & Nashville Railroad's South Branch to the Woodward Furnace.

Woodward used electric hoists to pull ore up the shaft until 1927. Until the late 1950s it was kept open as a ventilation shaft until the mine itself was abandoned and the openings capped.

Those surface works constitute the only Woodward Company site within the present Red Mountain Park. The headframe and other steel structures have been removed. The surviving hoist house is notable for its Spanish Mission-style design.