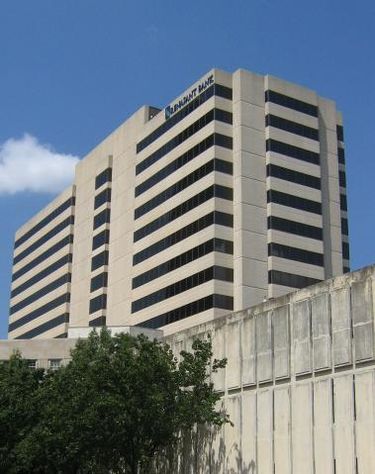 Renasant Bank is a Tupelo, Mississippi based bank which has branches and operations in the Birmingham District.

Renasant, originally known as The People's Bank and Trust Company, entered the Birmingham market with the January 1, 2005 purchase of Decatur's Heritage Bank.

In June 2008, Renasant moved its Alabama headquarters, which was previously split between Grandview Corporate Park and Century Park South, and the bank's mortgage operations for Alabama, Mississippi and Tennessee, into 22,000 square feet of space at Park Place Tower. Renasant spent about $1 million to renovate the offices, which houses 55 employees, 35 of which were moved from outside of Birmingham. Its downtown office was relocated a few blocks from the Watts Tower to Park Place in September.

In June 2011, Mount Clear Investments, LLC, the owner of the building where Renasant's Trussville branch was located, terminated the bank's lease in favor of a new tennant which wanted the entire 2-story building.

On September 1, 2013, Renasant completed the purchase of M&F Bank, moving Renasant to $5.8 billion in assets with 130 offices in Mississippi, Alabama, Tennessee and Georgia.

In 2014 Renasent acquired the Merchants & Farmers Bank, and HeritageBank of the South, based in Albany, Georgia. In 2018 it merged with Brand Group Holdings Inc. of Lawrenceville, Georgia, which operates 13 "BrandBank" offices in the Atlanta metropolitan area.