The Rialto Theatre (originally the Newsome Theater) was a 500-seat cinema opened in December 1915 by H. M. Newsome. It was housed in the remodeled 1906 building which formerly housed the Bonita Theater at 1923 3rd Avenue North, sandwiched between the 1909 Farley Building and the Alabama Luggage Company.

Newsome purchased the Bonita in 1913, shortly after completing his Trianon Theatre on 2nd Avenue North. Though he already owned three cinemas, he bought the fourth in order to secure local control of the thousands of motion pictures distributed by the General Film Company. Considering the state of the Bonita to be below his standards, Newsome hired architect William Leslie Welton to transform the building into a grand new screening room.

For his $50,000, Newsome obtained a sumptuous Adam-style theater, 30 feet wide and 140 feet deep. "Orchestra style" seats filled the sloping floor. The side walls concealed radiators for heat behind well-proportioned plaster panels. A series of arches framed murals executed in gold, pale green, and "Delia Robbia blue". The cornice at the top of the walls concealed light indirect lighting which reflected off the arched, modeled plaster ceiling. A theater organ was installed by Henry Pilcher's Sons of Louisville, Kentucky. An upper side gallery to the right of the screen was built for Memoli's Orchestra to accompany theatre presentations as well as to entertain patrons in Newsome's adjacent refreshment parlor. 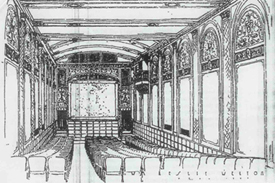 Interior of the Rialto. Birmingham News illustration of 1915

The projection booth, equipped with Simplex projectors, was secured on the second floor so as not to impede any seats, a first for Birmingham. Four exits in the front of the room and two in the rear, along with two generous aisles showed Newsome's sensitivity to issues of safety. The balcony also concealed a large louver through which fresh air was introduced by a 72" fan.

The lobby of the theater featured marble floors and walls, with ticket office, screen walls, and doorways built of walnut. A bronze-railed marble stair led to the balcony. Wide double doors connected to the adjacent candy store and refreshment parlor already operated by Newsome.

The name "Rialto", alluding to the famed bridge and jewelry market in Venice, Italy, was chosen in a contest held as part of opening day events on Christmas Day of 1915. The first film exhibited was Maurice Tourneur's Trilby, an adaptation of George du Maurier's Svengali starring Clara Kimball Young and Wilton Lackaye. Ticket prices were fixed at 10 cents.

Between 1927 and 1929 the Rialto installed a "Vitaphone" sound system, which played 16 inch resin discs along with the features as a soundtrack.

The Rialto closed in the 1930s, a victim of the Great Depression. The building was next inhabited by the Guarantee Shoe Company, which built a new floor level above the original sloped floor and added Art Deco styled partitions and stairs. In the 1980s, it housed the Famous Shoe Bar. In 1985 the building was documented as a contributing structure to the first boundary increase of the Downtown Birmingham Historic District on the National Register of Historic Places.

By 2004 the building, having been vacant for at least a decade when it had housed "Gift World", was back up for sale. It was purchased by Sam and Gwyn Moore and their son and daughter-in-law Chad and Chesney for use as a showroom for their office furniture company Moore Solutions and as a loft residence for the younger couple. The renovations to the building were documented online in a blog format.