From Bhamwiki
(Redirected from Ritz Theater)
Jump to: navigation, search 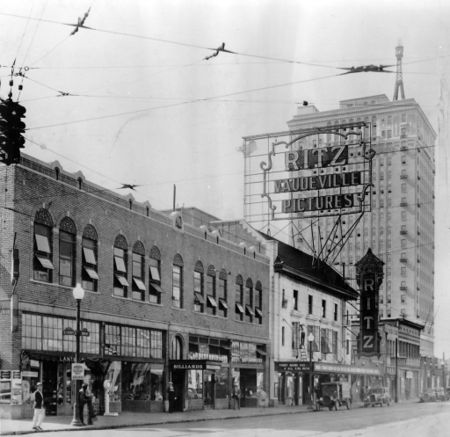 The Ritz Theatre was a "million dollar" air-conditioned movie theater 1719-1721 2nd Avenue North, opposite the Phoenix Building. It was built in 1926 for the Interstate Amusement Company, and alternated Vaudeville shows with motion pictures. With between 1,800 and 2,000 seats, the Ritz was the largest theater in the city when it was completed, and second only in size to the Alabama Theatre, built the following year.

The Ritz Theater was constructed by Charles M. Allen & Son. The structure incorporated 1,050 tons of steel framing and equipment, including a 15-ton balcony girder. It was equipped with, "the most perfect ventilation and air refrigerating plant available," at a cost of more than $100,000. Other features included two arclight projectors, spotlights, a 12' x 16' projection screen, an asbestos stage curtain, and "Worsted Wilton" velvet carpet made by Alexander Smith and installed by Burger-Phillips. The walls were draped by Loveman, Joseph & Loeb, with Holland blue velvet valences and galoons in an "early American" motif for the theater and "perfectly blended shades of bluebell and violet" in the lounge. Dixie Radiator Cabinets were installed over the radiators for decoration, protection and humidification.

The first manager was Vernon Reaver, and the "Ritz Augmented Orchestra" was led by Al Plante. The theater opened on August 15, 1926 with a screening of "More Pay-Less Work" starring Mary Brian and Buddy Rogers. Before the film was a stage performance by Vaudeville stars Herman and Sammy Timberg.

The Ritz showed the first "talkie" in Birmingham, a 1927 newsreel with an audio recording of President Calvin Coolidge's welcome to Charles Lindbergh in New York City. In 1930 the theater was bought by the Radio-Keith-Orpheum Company (RKO) and Karl Hoblitzelle was named managing director. In 1933 the operation was sold again, to the Wilby-Kincey Corporation. By the end of that decade the theater's $25,000 2/6 Kilgen/Robert Morton pipe organ was no longer in use. The Ritz hosted the Birmingham premiere of Gone With The Wind on January 31, 1940.

In 1962 Wilby-Kincey updated the property for wrap-around Cinerama projection. The project involved demolition of the lobby and a reduction in seating capacity from 1,700 to 500. An enormous stage curtain was installed to mask the damage. The remodeled theater, managed by Cecil Brown, re-opened in June as the Cinerama Ritz (or Ritz Cinerama). The opening night screening of 1952's This is Cinerama was accompanied by the Birmingham-Southern College Choir, a Marine Corps color guard, child pianist Delores Hodgens and Governor John Patterson. In November 1963 the Ritz switched back over to regular-format features. In the 1970s the theatre screened "grindhouse" films. Its last screening was of "Thunder and Lightening" starring David Carradine and Kate Jackson in 1977.

The vacant theater was put up for auction in 1982. Robbie Arbitelle, owner of the neighboring Magic Palace magic shop, took possession of some seats and other artifacts, which he displayed in his store. He made a bid for the theater building, but lost out to the T. M. Burgin Demolition Company, which tore down the Ritz that year. The site is now part of the surface parking lot behind the Birmingham Police Headquarters.