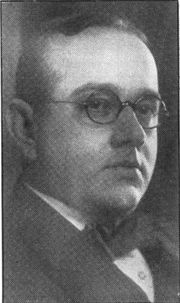 Robert Randolph Meyer (born August 1, 1882 in Montgomery; died October 31, 1947 in Birmingham) was a hotel manager and founder of the Robert Meyer Hotels company, which he modeled after the Statler Hotels chain. As an experienced hotelier, Meyer was brought in to consult on the opening of Birmingham's Tutwiler Hotel in 1914. Meyer's "Robert Meyer Hotels" management portfolio included the Winecoff Hotel in Atlanta, Georgia; the Hotel Windsor and Hotel Roosevelt in Jacksonville, Florida, the Hotel Stacy-Trent in Trenton, New Jersey; the Abraham Lincoln Hotel in Reading, Pennsylvania; the Hotel Sir Walter in Raleigh, North Carolina; the Emerson Hotel in Baltimore, Maryland; the Farragut Hotel in Knoxville, Tennessee; and the Hermitage Hotel in Nashville, Tennessee.

Meyer purchased a home in the Jemison Company's newly-established Valley View subdivision on Altamont Road in 1917 and commissioned a major remodeling. The Robert Meyer residence was one of the first private homes in Birmingham to have its own swimming pool. Meyer purchased a group of paintings of Civil War scenes commissioned from Gilbert Gaul by the Southern Art Publishing Company in Nashville, Tennessee. Those works were later donated to the Birmingham Museum of Art.

Meyer created the Robert R. Meyer Foundation at First National Bank of Birmingham in 1942. The foundation has supported numerous local institutions, including Southern Research, the Birmingham Botanical Gardens, the Birmingham Zoo, and the Meyer Planetarium at Birmingham-Southern College.