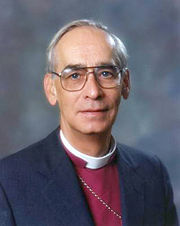 Miller is a graduate of Phillips High School and Birmingham-Southern College, where he completed a bachelor's degree in psychology in 1960. He earned a bachelor of divinity at Candler Theological Seminary at Emory University in Atlanta, Georgia and continued his studies at the University of the South in Sewanee, Tennessee.

Miller began his ministry as an associate pastor at First Methodist Church in Anniston in 1963. He went on to direct the Wesley Foundation at Jacksonville State University before seeking ordination in the Episcopal Church, which was granted in 1968. He served as rector of St Wilfrid's Church in Marion, as priest-in-charge of Holy Cross Church in Uniontown, rector of the Church of the Holy Comforter in Montgomery, and rector of St Francis of Assisi Church in Indian Springs Village. He was also chaplain of Judson College and Marion Military Institute in Marion.

Miller was elected suffragen bishop under Furman Stough in 1986 and succeeded him in 1989. As Bishop of Alabama, Miller was keenly interested in the church's ministry to children and young adults. He created a full time diocesan office to support church youth ministries. He also supported the development of Birmingham Campus Ministries and the Diocese's AIDS Task Force. He served on the Standing Liturgical Commission for the national church body and also was a trustee for Alcoholics Anonymous and for the University of the South.

Miller died at Trinity Medical Center in Birmingham following heart surgery. He was survived by his wife, Peggy Fisher, two daughters and one granddaughter. He is interred in the columbarium in the courtyard of the Cathedral Church of the Advent.