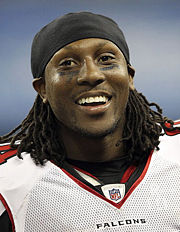 Sharod "Roddy" Lamor White (born November 2, 1981 in James Island, South Carolina) is a professional football wide receiver for the Atlanta Falcons in the National Football League. He was selected with the 27th pick overall in the 2005 NFL Draft out of the University of Alabama at Birmingham.

White attended James Island High School in Charleston, South Carolina, and was a three-sport letterman and standout in football, baseball, and wrestling. In football, he broke every school career receiving record, was a two time All-Low Country honoree, a two-time All-State honoree, and was also listed as one of the top receivers in the nation on Rivals.com. In wrestling, he was a two-time state champion.

White attended the University of Alabama at Birmingham and was a football star and a sociology major. As a football wide receiver, he finished his career with 163 receptions for 3,112 yards (19.1 yards per rec. avg.) and 26 touchdowns for the Blazers, and was an All-Conference USA second selection as a junior, and was a All-Conference USA first-team selection as a senior. He also led the nation with 1,452 receiving yards and ranked third in the country with a 20.5-yard per catch average in 2004 and accounted for six 100-yard receiving contests. He was named a Pro Football Weekly All-American and a third-team selection by the Associated Press in his senior season.

White saw instantaneous action in his rookie campaign. He ranked fourth among all rookie receivers in 2005. Although, a high ankle sprain injury caused him to remain on the sidelines for much of the preseason, he recovered by Week 2 of the 2005 season and was put back on the team's roster. In Week 4 of the 2005 season, against the Minnesota Vikings, he was inserted in the lineup as the No. 3 receiver. During the course of the game he racked up 64 yards on 5 catches. However, during the rest of the season, his performance was spotty at best. He made a fantastic leaping catch over three defenders on a trick play against the New Orleans Saints during Week 14 for a 54-yd touchdown, but dropped a touchdown catch the next week against the Tampa Bay Buccaneers, although he had a 108-yard receiving performance vs. Tampa Bay (11/20) which was the second-highest receiving total put up by a rookie wide receiver in 2005, only surpassed by Jacksonville Jaguars WR Matt Jones (117 yards vs. Baltimore).

In the Falcons 2007 game against the New Orleans Saints, White showed his support for fellow Falcon Michael Vick by wearing a t-shirt that said "Free Mike Vick" and pulling up his jersey after scoring a touchdown. Earlier that day, Vick was sentenced to 23 months in jail on dogfighting charges.