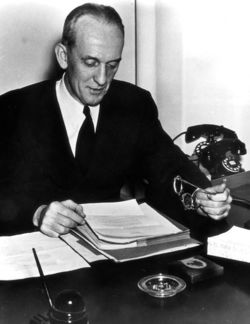 Roy Rachford Kracke (born 1897 in Hartselle, Morgan County; died June 27, 1950 in Sylacauga) was the first dean of the Medical College of Alabama, which eventually became the University of Alabama at Birmingham.

Kracke began his education at the Alabama Polytechnic Institute, but left after a year to work as a pharmacy assistant in Guntersville and, later, in North Birmingham. During World War I he trained in the U.S. Navy Hospital Corps and served 18 months at U.S. Naval Base Hospital Number 1 in Brest, France.

After the war he worked as a lab instructor at the U.S. Naval Medical School in Washington D.C., and then as a lab assistant for William S. Krauss in Memphis, Tennessee. He enrolled as a student at the University of Alabama in 1920 while working as a part-time instructor in bacteriology. After marrying the former Virginia Minter, and patenting the "Kracke staining dish", a laboratory tool which earned him a small income in royalties, Kracke moved to Chicago to complete his training.

Kracke earned his doctor of medicine at the Rush Medical School of the University of Chicago. He resumed his medical and academic careers as a professor of pathology, bacteriology and laboratory diagnosis at Emory University in Atlanta. As an expert in blood diseases such as leukemia, Kracke authored the fundamental text Diseases of the Blood and Atlas of Hematology. He was known as a constant experimenter, raising rabbits and rats at home and enlisting the aid of his children to advance his experimental knowledge.

After turning down an offer to work alongside George Pack at his New York cancer research center, Kracke accepted an offer to return to Alabama to help found a new medical university in Birmingham. He moved into an office at Hillman Hospital in the summer of 1944 and began the process of negotiating its transfer from Jefferson County to the University of Alabama, developing a medical faculty, and lobbying for the development of a major medical center. In addition to securing land for the Crippled Children's Clinic and the Birmingham Veterans Administration Hospital, he argued passionately for the need to group these facilities together to make the best use of teaching, service and research capabilities. He planned the expansion of the Hillman building to accommodate the needs of the new medical school and participated in the improvement of medical care for the entire region. At the same time he struggled to overcome tensions with University president John Gallalee, mainly on the the issue of how much autonomy the Birmingham campus should have.

Kracke, the grandson of a Georgia native who enlisted with a Union company in the Civil War, quietly pursued improvement in Birmingham's racial divide. He helped to further the goals of local black physicians groups and even enrolled three African-American women into his nursing program in 1947.

Kracke suffered a heart attack in April 1950, and then was killed by a second attack on June 27 of the same year while visiting a patient in Sylacauga. He was buried at Oak Hill Cemetery.

The former nurse's dormitory adjacent to Hillman Hospital was renamed as the Kracke Building in his honor on July 18, 1965.