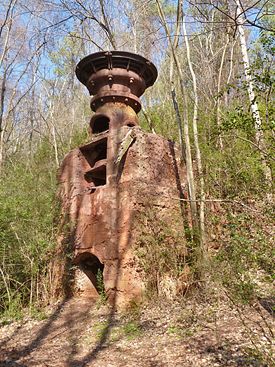 Ruffner No. 2 mine (originally part of the Irondale Mines or Upper Sloss Mines) was an ore mine operating from about 1886 to 1953 on the southeastern slopes of Ruffner Mountain to supply the Sloss-Sheffield Steel and Iron Company with red iron ore. The mine's ore crusher and other ruins remain as points of interest in the Ruffner Mountain Nature Preserve.

The mine originally employed drift mining techniques to access exposed outcrops of the soft iron-rich Irondale Seam and some parallel outcrops of the Big Seam. These workings proceeded generally at a slight rise to allow for drainage, and did not follow the seam below ground into the depths of the mountain. Ruffner No. 1 mine preserves the most evidence of that type of ore mining in the Birmingham District.

The ore mining itself was carried out by contracted workers, usually African-Americans working under the direction of white supervisors. In 1892 the miners earned 60¢ per car (approximate one ton). After the scales were added, they were paid by the ton. The miners cut the face with picks, wedges and sometimes explosive charges. They loaded the cars and conveyed them under their own power to the surface works on tram rails they had laid themselves. A bonus of 2½¢ per 400-feet of tramway was paid for long haulages. Miners also broke up the non-ore rock (gouge) as needed to access the seam and stacked it in long wall-like mounds outside the tunnels. 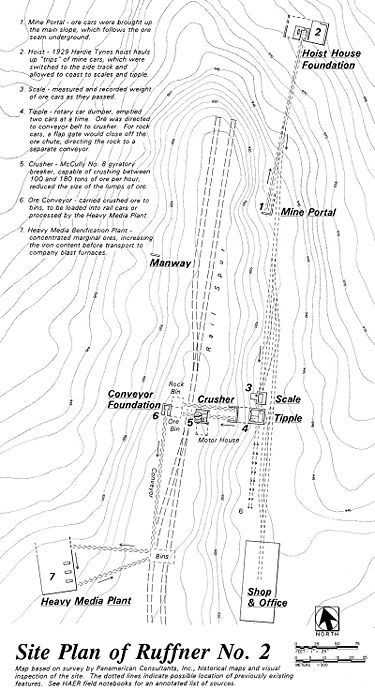 The No. 2 mine was expanded and improved in 1908 as Sloss was switching from drift to underground slope mining to exploit less accessible areas of the Big Seam. The underground mines followed the angle of the Big Seam into the mountain. Trips (ore cars) filled in side passages were brought to the central passage, then hauled to the surface by a powered hoist. A side track allowed the cars to roll under their own power to a scale for weighing, and to the tipple which conveyed the ore into the top of a massive crusher. Rock cars filled with mine spoils during excavation would be diverted to another conveyor. The output from the crusher was loaded immediately onto rail cars on a spur of the Birmingham Mineral Railroad. A boiler plant provided steam power to the hoist and crusher.

The operation was upgraded with a 200 horsepower Hardie-Tynes steam-powered hoist after 1929. The surface plant, which also served adjoining mines, used a McCully No. 8 gyratory breaker capable of crushing 100 to 180 tons of ore each hour. In 1939, years after the other Ruffner mines had been abandoned, the entire No. 2 mine was modernized. In the early 1950s a benification plant was built below the crusher, and was the first plant in Alabama to employ heavy media separation for the improvement of ores before they were sent to the furnaces.

The workings at Ruffner No. 2 were left idle in 1952. As the operations were abandoned, the area became an occassional illegal dump site. An explosion in a former storage building caused damage to buildings in Roebuck and Irondale in 1971. The mine entrance was sealed and the property, owned by Walter Industries' real estate division, United Land, was ceded to Ruffner Mountain Nature Preserve by 1993 when the Birmingham Historical Society commissioned a survey and drawings of the site for the Historic American Engineering Record (HAER). The surface works are accessible by an unmarked trail from the Lizard Loop trail. The park plans to add interpretive signage and other improvements in the future.