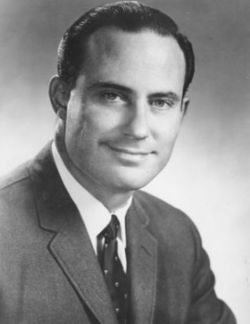 William Ryan deGraffenried Sr (born April 15, 1925 in Tuscaloosa; died February 9, 1966 near Fort Payne) was an attorney and member of the Alabama State House of Representatives and Alabama State Senate.

DeGraffenried was the son of former U.S. Representative Edward deGraffenried and his wife, the former Grace Ryan. He graduated from Shades Cahaba High School in 1943 and was an All-State guard and captain of the Mounties football team. He was also a member of the state champion debate team, president of the student body and president of the Alabama Association of Honor Societies.

After graduating, deGraffenried enlisted in the U.S. Army and was assigned to the Armored Infantry Regiment of the 3rd Armored Division for service in Europe during World War II. He was wounded twice and received a Purple Heart with oak leaf cluster. He married the former Margaret Nell Maxwell in July 1945, enrolled at the University of Alabama in 1946 and completed his degree at the University of Alabama School of Law in 1949, editing the Alabama Law Review during his senior year.

DeGraffenried won his first campaign for state legislator in a special called election to fill the seat left vacant by the death of J. P. Shelton in 1954. He was assigned to the House Committee on Ways and Means. He sponsored a law that streamlined pre-trial depositions and also pushed a bill to eliminate absentee ballots, but it foundered in the Senate. He also took partial credit for several road improvement and capital projects in Tuscaloosa County. In the 1958 primary elections deGraffenried ran unopposed for the county's Place 3 in the Alabama State Senate. As a Senator, deGraffenried filibustered to prevent a Congressional reapportionment that would have split Jefferson County between two districts.

DeGraffenried ran twice for Governor of Alabama. He was considered a "moderate" on race issues, though he mainly avoided the question in order to emphasize the need to focus on other issues. He was defeated by George Wallace, 340,730 to 269,122, in the runoff of the 1962 Democratic primary. He qualified again four years later, with Wallace ineligible for re-election due to the state constitution's one-term limit, a provision that deGraffenried fought to preserve during the session.

DeGraffenried was known as a progressive, in contrast to Wallace's racist populism. He was considered a leading candidate, but died in a plane crash early in the campaign. He and his pilot, Bob Hoskins had just left the airstrip in DeKalb County for Gadsden when a downdraft slammed the Cessna onto the face of Lookout Mountain near Fort Payne. He was pronounced dead after rescue workers found the wreckage early the next morning. First Lady Lurleen Wallace went on to win the May 3 primary and was elected to succeed her husband.

DeGraffenried's son, Ryan Jr followed in his father's footsteps as a State Senator and acting Lieutenant Governor of Alabama.