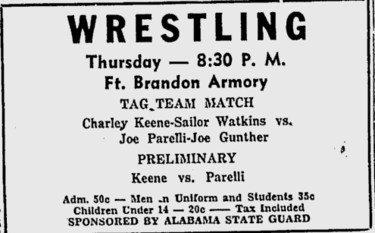 Sailor Watkins (born Kirby Carroll Watkins, January 28, 1905 in Moody, Texas, died unknown) was a professional wrestler who worked throughout the United States in the 1930s and 1940s. He also wrestled under the names Popeye Watkins, Tex Watkins and Sailor Tom Watkins.

The line between fact and fiction has always been blurred in professional wrestling. Watkins' recorded back story began in the U.S. Navy aboard the battleship California. He won the Pacific Fleet Wrestling Championship three times and won the U.S. Navy Championship before a crowd of 10,000 in a tournament in the Canal Zone.

Watkins was wild in the ring, doing such things during a match as climbing the ropes and beating his chest “like a monkey,” as one newspaper reported. The many tattoos that he got in the Navy served him well in a profession where appearance is as important as skill. For added effect, he would often twist his face like the popular cartoon character Popeye.

During much of the 1940s, Sailor Watkins was a regular on Birmingham promoter Joe Gunther's wrestling cards, which were held at Municipal Auditorium, Legion Field, and Rickwood Field. He was part of a regular cast of stars, which included Charlie Keene, Green Shadow (Pat Malone), Red Byrd, Nick Carter, Joe Parelli, Herb Welch and The Bat (Sid Nabors).

While working for Gunther, Watkins lived in the Birmingham area. He was a regular at the night spots of that time and owned at least one bar before buying property in Midfield from Charlie LaRocca to open a bar and restaurant. The business failed and Watkins sold the building to B. Y. Williams for a toy store in 1953.