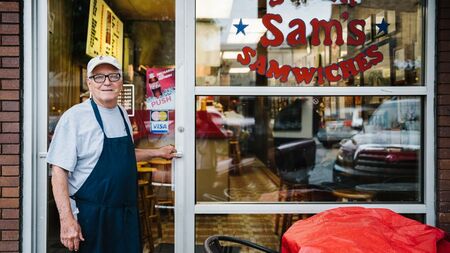 Sam's Super Samwiches (sometimes erroneously called Sam's Super Sandwiches) was a former Sneaky Pete's location at 2812 18th Street South in downtown Homewood that was converted by Pete's brother Sam Graphos to a short-order sandwich shop when he took it over in 1974.

The menu featured hamburgers and grilled sandwiches as well as hot dogs, all prepared to order. For seating, there were only a few barstools lined up along a narrow counter on the wall opposite the galley kitchen.

Graphos died on October 5, 2021. His family continued to operate the business, but were forced to find another location after losing their lease. Sam's Super Samwiches reopened at SoHo Square in February 2022.