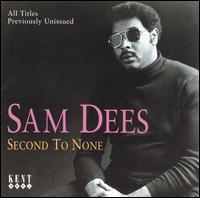 Sam Dees (born December 17, 1945) is a soul singer, songwriter, and producer. He was born in Birmingham to a large family. His vocal talent emerged early in life, and he won a number of singing contests. When he was still nine years old he formed a singing group, the Bossanovians and began to travel.

Dees began recording in his early 20s for SSS International in Nashville. He put out two singles on Birmingham-based Lolo Records, recorded by Bob Groves, including "It's All Right (It's All Wrong)" which had been written for Percy Sledge and "Don't Keep Me Hanging On", which he wrote himself. He created the Moonsong Publishing Company in 1969 to release his own songs. He produced several singles for Clintone Records at the New London Recording Studio in Homewood.

Within a couple of years Dees was recording on Chess for executive producer Lenny Sachs. Under Sachs umbrella he recorded "Love Starvation", "Maryanna", "Can You Be a One Woman Man", and "Put You Back in Your Place" in a former Birmingham church. He then began recording for Atlantic and put out one of the landmark albums of the soul genre with 1975's The Show Must Go On. His recording career was eventually overshadowed, however, by his ability to craft and produce hit songs for other artists. Dees' songs include "Am I Dreaming" (Atlantic Starr), "One in a Million You" (Larry Graham), "Save the Overtime (For Me)" (Gladys Knight), "Love All the Hurt Away" (George Benson and Aretha Franklin), and "Lover for Life" (Whitney Houston). He created his own Label, Pen Pad, on which he released his second full album, Secret Admirer.