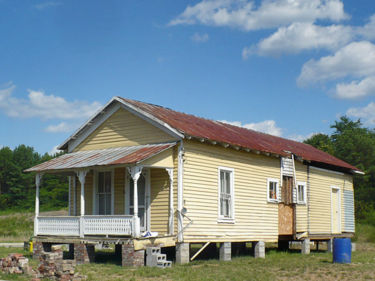 The Thornley residence in July 2009

The Sam Thornley residence or Burrell-Country House is a small wood-frame shotgun house built before 1900 at Cardiff. Constructed originally as a 2-story structure, the house was reduced to one floor and approximately 500 square feet of living space by later owners. The house was built without plumbing or gas and was heated by wood stoves.

The first known resident was Sam Thornley, who lived there at the turn of the century and died in the 1920s. Afterward Louis Negron purchased the house for his son Bill and his wife Opal.

The Negrons divorced in 1943 and the home was sold to sisters Bertha and Hazel Burrell. Bertha died in 1962 and Hazel lived in the house until she suffered a stroke in 1990. She spent the last two years of her life with Donald and Opal Norman at their home in Forestdale and willed the cottage to them when she died in 1992.

Norman turned the cottage over to then-Cardiff Mayor Joe Country, who owned the adjacent property, in 2006. After Country's death his grandson, Joseph Graham was awarded the combined property in probate. Graham began remodeling the main house, but ran into a hitch when the vacant cottage was classified as an insurance liability. Rather than demolish it, he offered to donate the house to the Five Mile Creek Greenways Partnership.

The Partnership worked with the Town of Brookside to secure a loan to relocate the cottage to the municipal complex on Brookside-Coalburg Road and make use of it as a Brookside History Museum with displays on the area's mining industry. Fund raising to repay the loan, restore the house and develop historical displays is ongoing, with hopes that the house can be opened for the 2010 Brookside Greenway Festival.