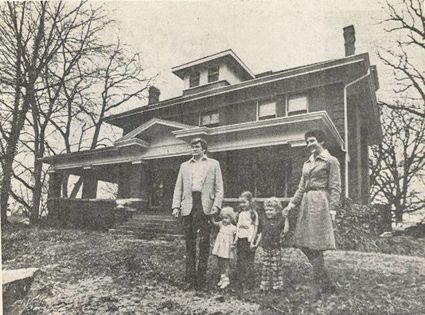 The Samuel Barnett residence in 1976 with its new owners, the Sutton family. Photo by Ed Jones for The Birmingham News

The Samuel Barnett residence (sometimes called the Barnett-Sutton House, Tannehill/Tannahill House, or Barnett-Tannahill-Sutton House) was a large red brick and stone mansion built between 1902 and 1908 at 3832 10th Avenue South (then called Summit Avenue) at the corner of 39th Street in Forest Park. It was commissioned by Sameul Treutlen Barnett for his new bride, Sara.

The massive two-story brick house was noted for its full-width front porch with a central gable supported by square stone columns. The four chimneys served a total of eight fireplaces. The hand-pressed bricks and the large stones for the house were shaped in Pennsylvania and transported to Birmingham by rail. The interior of the house featured an ornate carved oak staircase lit by stained glass windows.

The Barnetts' daughter Claire married a descendent of the family of Ninian Tannehill, and lived in the house with him and raised three children there, thus establishing the connection that gave the house one of its alternate names.

The house was purchased in 1972 by dentist Robert Sutton and his wife, Patty after it had stood vacant for 12 years. The Suttons were members of the Alabama Live-In-A-Landmark Council and made the house the first in Birmingham to be listed in the national "Live-In-A-Landmark Register".

The Suttons restored the house, making numerous repairs and replacing the coal-fired furnace after it exploded. Claire Tannahill visited and alerted them to the presence of a wooden porch swing stored in the basement, which had been made from trees cut on the property. The Suttons added a wooden deck to the rear, with lattice screens below.

In late 2006 their son, Patrick began a second major renovation in preparation for putting the house back on the market. On January 20, 2007, with $60,000 already spent on the work, the house was destroyed by fire. The site was cleared that July.