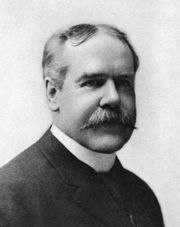 Samuel Minturn Peck (born November 4, 1854 in Tuscaloosa; died May 3, 1938 in Tuscaloosa) was a poet and writer who was honored as the first Poet Laureate of Alabama. He was known unofficially by that title as early as the 1890s, but it was not made an official post until 1931. After his death, the office of Poet Laureate remained vacant until 1954.

Peck was the youngest of nine children born to attorney Elisha Peck and his wife, the former Lucy Lamb Randall. The family moved to Illinois in 1865, but returned to Tuscaloosa after two years. Peck enrolled at the University of Alabama in 1871 and completed a master's degree there in 1876. In accordance with his parents' wishes, he went on to pursue a doctorate at Bellevue Hospital Medical College in New York, New York, but never practiced as a physician. Instead he took additional courses in language and literature at Columbia University and pursued a literary career.

Peck, who had contributed verse to various magazines, published "The Orange Tree," the first to appear under his own name, in The New York Evening Post in 1878. His first book of verse, Cap and Bells, included 86 poems. It was published to great acclaim in 1886 and eventually ran to five editions.

Peck's father, who had served a six-year term as Chief Justice of the Alabama Supreme Court during Reconstruction, died in February 1888. Peck used his inheritance to voyage to Europe seven times between 1895 and 1914. He studied briefly at the Alliance Française in Paris and toured the countryside by bicycle.

He published six more volumes of light verse. Several of his works were set to music. His most renowned poem, "The Grapevine Swing", first published in the collection Rings and Love-Knots in 1892, became a frequent piece used for memorization in grammar schools, and also, set to music, a popular song in minstrel shows.

In May 1893 Birmingham's Weekly Age-Herald reported that, "The life of Samuel Minturn Peck, Alabama's poet laureate, is being made miserable by autograph fiends, says the Tuskaloosa Times. He is in daily receipt of letters requesting his signature, many of them coming from distant countries beyond the seas. Much of his time is given up to such correspondence."

Peck did not adopt modernist techniques of poetry, and privately criticized the work of poets such as Amy Lowell and Ezra Pound. He satirized Clement Wood's work in "The Poet and the Pixie" and later observed that his preferred style of writing had become "somewhat passé". Nevertheless he remained popular, and in 1930 the Alabama Writers Conclave petitioned the state legislature to create the post of "Poet Laureate" for him. He accepted the honor on March 5, 1931.

Peck also wrote prose, contributing "sketches" of local color to various newspapers, along with critical essays and other short works. Twenty-five of his "Alabama Sketches", set in a fictional version of Tuscaloosa he called "Oakville", were published in compilation in 1902. He never published any long prose, but did leave four unfinished novels after his death in 1938.