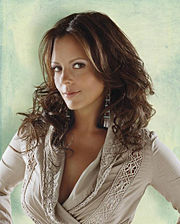 Sara Lynn Evans (born February 5, 1971 in Boonville, Missouri) is a country music singer-songwriter who emerged in the late 1990s and has had a string of major hits on the Billboard Country Chart. She currently resides in Birmingham with her husband, Jay Barker.

Since emerging in the late 1990s, Evans has become one of country music's most popular female vocalists, charting four No. 1 country hits and releasing three platinum-certified albums, as well as the double-platinum Born To Fly (2000), still her biggest-selling album.

Born in rural Missouri, Evans was the first of seven children and was raised on a farm and performed, since the age of five, with the family's band. At age eight, she was struck by an automobile in front of the family home, and both her legs suffered multiple fractures. Recuperating for months in a wheelchair, she continued singing to help pay her medical bills. When she was 16, she began performing at a nightclub near Columbia, Missouri, a gig that lasted two years.

In 1991 Sara and her brother Matt signed a publishing agreement with Gary Daily Publishing and moved to Nashville. It was at this time that Sara recorded a series of self composed songs at Nashville's famed Sound Emporium. These songs are now being marketed through E & S Records in an album titled The Early Years. It was also at this time that she met fellow musician, Craig Schelske. She then left Nashville with Schelske in 1992, where they moved to Oregon. After the couple married in 1993, Evans returned to Nashville in 1995, where Evans began recording demos. Nashville songwriter Harlan Howard was impressed by Evans' demo of his song "Tiger by the Tail". Howard decided to help Evans' music career, which eventually led to a signed contract with the RCA Nashville record label.

In 1997, Evans released her first album under RCA, Three Chords and the Truth. Critics praised the album for returning to traditional country and included it in many of their year's "top 10" lists. The album included a cover version of older Country song, Patsy Cline's "Imagine That", which originally reached #21 for Cline on the country charts in 1962. However, the album did not catch on with country radio at the time, and none of the three singles made the top 40. It would be another year before Evans gained full popularity. In 1998 Evans released her second album, No Place That Far. She still remained a critic's darling, despite her new pop/country sound. Her first single, "Cryin' Game", hardly made a ripple on the charts, peaking outside country's Top 40. However, it was her next single, "No Place That Far", a duet with Vince Gill, that brought Evans massive success, reaching #1 on the country charts, as well reaching the Billboard Hot 100 Top 40, Evans' first major hit. Because of the success the album gained, Evans' album was certified Gold by the RIAA that year.

In 2000, Evans worked on a third album to be released later that year. Born to Fly was released to stores on October 10, 2000, and later became another major-selling album. She insisted on hiring Seattle-based rock drummer Matt Chamberlain (The Wallflowers, Edie Brickell), who brought a slightly different sound to her music. The album became Evans' first album to receive a Platinum rating by the RIAA, and spawned four country hits, including the title track ("Born to Fly") written by Evans and Nashville veterans Marcus Hummon and Darrell Scott. The first single released from the album, the song reached the #1 spot on the country charts, and was Evans's first #1 as a solo artist. Hits continued from the album all the way into 2002. The second single, "I Could Not Ask for More", was released in 2001, the Country version of Edwin McCain's big Pop-Rock hit from the year before. Evans' version reached #2 on the Billboard Country Chart and reached #32 on the Billboard Hot 100, ironically an even bigger Pop hit then McCain's version on Billboard's Hot 100 (McCain's version reached #37). In 2002, the songs continued to be released from the album, "Saints & Angels" and "I Keep Looking" were the last two singles released from the album. "I Keep Looking" reached No. 5 and "Saints & Angels" reached #16. In 2004, the Born to Fly album was officially certified 2x Platinum by the RIAA.

In 2001, Evans was the most-nominated artist at the Country Music Association awards with seven nominations overall, and she won her first CMA award when "Born to Fly" won the award for Video of the Year, her first major award from Country music.

In 2003, Evans recorded a long-awaited fourth album, Restless. The album sold over 40,000 copies within its first week and debuted at #20 on the Billboard 200 and #3 on the Top Country Albums charts. The lead single, "Backseat of a Greyhound Bus" didn't reach the Top 10 and peaked at #16 on the Billboard Country Chart in 2003. It was the follow-up single in 2004, "Perfect" that became a big hit and peaked at #2 on the Billboard Country Chart. The third single, "Suds in the Bucket" reached #1 by the end of 2004, and became her first chart-topper since 2001. The album was eventually certified "Platinum" by the RIAA.

In 2004, Evans was the most-played female singer on country music radio. Evans also performed at the 2004 Republican National Convention. Restless received a nomination by the Academy of Country Music in the Spring of 2005.

After 2003's Restless album, Evans re-emerged with a fifth studio album titled Real Fine Place released October 4, 2005. The album's lead single, "A Real Fine Place to Start", was the album's first single, reaching No. 1 on the country charts in 2005, as well as reaching the Top 40 at No. 38. The single marked the first time Evans charted on Billboard's "Pop 100" and "Hot Digital Songs" chart, reaching No. 67 and No. 62 respectively. "A Real Fine Place" was another Gold-certified single by the RIAA. The album, sold 130,000 copies within its first week, becoming Evans' first album to reach the No. 1 spot on the "Top Country Albums" chart, while also becoming her most successful album on the "Billboard 200" to date, reaching No. 3. The album sold three times more copies than her previous album had done. On December 6, 2005, Evans released the compilation album, Feels Like Home through Cracker Barrel stores. The album contains remixes of some of her most popular songs, including a live version of "Born to Fly" and an acoustic version of "No Place That Far". In 2005's the album's follow-up single "Cheatin'" was a top 10 Country hit, peaking at No. 9 there. The third single released from the album, "Coalmine" was the least successful single, peaking at #37 in early 2006.

In 2006, R&R announced Evans as there "Female Vocalist of the Year" in its 2006 Readers' Poll. In spring 2006, Evans released Always There through Hallmark stores for Mothers' Day. The album has six of her favorite already-released songs, including a live version of "Suds in the Bucket" and an acoustic version of "Born to Fly." Two new songs are on the disc: "You Ought to Know by Now" and "Brooklyn & Austin."

In 2006, the last significant single from the Real Fine Place album was released titled, "You'll Always Be My Baby", which was a Top 15 country hit, peaking at No. 13 on the country charts, but missing Billboard's Hot 100, reaching its peak position on the Bubbling Hot 100 at No. 105. An album cut released from the album in 2006, "Missing Missouri" reached No. 52 on the Country charts that year. Since its release, Real Fine Place is currently Evans' biggest-selling album. On May 23, 2006, Evans competed and performed at the 2006 ACM awards show in Las Vegas, where she won her first ACM for the "Top Female Vocalist". Evans also became a spokesperson for National Eating Disorders Association, and has spoken out widely on this subject, as she has been personally affected by it. She also hosted a charity event, Fashion for Every Body, which featured a fashion show, silent auction and performance by Evans.

In September 2006, Evans began competing with other celebrities on the third season of ABC's Dancing with the Stars with (professional) partner Tony Dovolani. Evans launched a new fan web site to provide behind-the-scenes material from her participation on the program. Evans was the first country music singer to ever participate in the show. However, then had to leave the show in October, originally citing personal reasons. However, it was later discovered Evans left due to a divorce.

On October 9, 2007, Evans released her first Greatest Hits collection. The compilation features four new songs, one of which has already been released to radio, "As If." The song was a big hit peaking at #11. The second single, "Some Things Never Change", was released in early 2008 and peaked at #26 on the Billboard Country Chart. A third single, "Love You with All My Heart", was released to country radio on June 23, 2008. She released the gift book "You'll Always Be My Baby" (based on her song). It was written by Evans, Tony Martin and Tom Shapiro. On November 7, 2007 Evans hosted with LeAnn Rimes the 41st annual CMA Awards show.

From February 13-18, 2008, Evans held a tornado relief online auction. She sold items connected to the video for her song "As If". Nearly $2,729 was raised. Proceeds benefitted the American Red Cross Disaster Relief Fund.

Evans has been the subject of numerous controversies. On October 12, 2006, Evans left Dancing with the Stars, citing personal reasons. On October 13, it was revealed that Evans had filed for divorce from Schelske.

Evans' ex-nanny, Alison Clinton Lee, has sued her for $3 million, claiming that Evans has smeared her name by including it in her divorce papers, as one of the many women with whom Evans claims Schelske had affairs. Evans additionally claimed that Schelske was addicted to pornography. Divorce documents filed in Williamson County, Tennessee by Evans' estranged husband, Craig Schelske, accuse the singer of having close to a dozen affairs. The list includes singer/songwriter Richard Marx, country star Kenny Chesney, Dancing with the Stars partner Tony Dovolani, and several members of the rock band 3 Doors Down. Marx's former manager and Chesney's publicist have refused to comment on this issue. Kirt Webster, a spokesperson for 3 Doors Down, stated that the accusations are untrue, but that the band members "are saddened by what she's going through."

On September 28, 2007, Evans and Schelske divorced. Evans will pay him a minimum of $500,000 in alimony over a ten-year period. Evans was awarded custody of her three children with visitation rights to Schelske.

Evans and former University of Alabama quarterback Jay Barker announced their engagement on March 24, 2008. They were married on June 14, 2008 in front of 145 guests. Their seven children served as attendants at the black and white affair in Franklin, Tennessee. Her son, Avery, walked her down the aisle. Their primary residence is in Mountain Brook with Sara's home in Franklin serving as their second home.

In 2009 Evans was profiled for the "Backstory" feature series on the Great American Country cable channel.