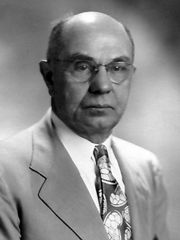 Seale Harris (born March 13, 1870 in Cedartown, Georgia; died March 17, 1957 in Birmingham) was a physician and medical researcher known for his discovery of hyperinsulinism.

Harris, the 6th of ten children born to Charles Hooks and Margaret Ann Monk Harris of Georgia, attended the University of Georgia and earned his first medical degree at the University of Virginia in 1894. He opened his first medical practice in Union Springs, Bullock County. He married the former Stella Baskins in 1897 and served as an officer of the Bullock County Health Department.

Harris went on to study in New York and complete postgraduate studies at Johns Hopkins University in Baltimore, Maryland. He joined the faculty of the Medical College of Alabama in Mobile as chair of the practice of medicine in 1907. He purchased the Mobile Medical and Surgical Journal and operated it as the Gulf States Journal of Medicine and later the Southern Medical Journal. He moved to Birmingham in 1915 and returned to private practice.

During World War I Harris was commissioned a major in the U. S. Army Medical Corps. He joined the staff of General William Gorgas for service in Europe. He was then promoted to Colonel in the Medical Reserve Corps based in Washington D. C., and also edited the Paris-based journal War Medicine.

After the war, Harris moved to Birmingham and founded the Seale Harris Clinic in the Empire Building in 1920. He expanded it into a 50-bed inpatient clinic on Highland Avenue in 1922. During the Great Depression, Harris rented his clinic to a Baptist Association, thereby helping to establish the Gorgas Hospital Hotel, which eventually became Trinity Medical Center. In 1939 he resided at 3013 Canterbury Road. In 1945 he reopened the Seale Harris Clinic

Harris' primary research interest was in the study of diabetes. He visited the Canadian discoverers of insulin and began studying non-diabetic patients with high insulin levels, a condition he described in a 1924 article in the Journal of the American Medical Association as hyperinsulism. The condition, which results in hypoglycemia, was, for a time, known as "Harris' syndrome". He was a founder of a summer camp near Mobile for diabetic children which was later named "Camp Seale Harris" in his honor.