Logotype used by the Shelby Iron Company in 1875

Horace Ware purchased land on the banks of Camp Branch Creek in Shelby County in 1841 and 1842 with business partner John McClannahan. He began construction of a brick and stone blast furnace with a 30 foot tall stack two years later. It was completed in 1846 and started producing iron up to its maximum of five tons per day. 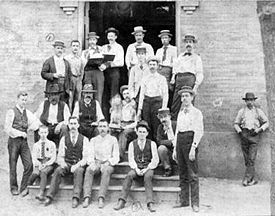 Workers in front of the company's commissary

This first plant was damaged by fire in 1854 and was rebuilt as a puddling furnace. Wrought iron bars produced in this furnace were sent to Sheffield, England and made into steel cutlery of high quality, winning the esteem of the manufacturer. In 1858 he incorporated the Shelby County Iron Manufacturing Corporation.

By 1860 Ware expanded the operation with a 10-ton capacity rolling mill, the first of its kind in Alabama. On April 11, 1860 the Shelby Furnace produced the first finished bar iron produced in the state. Early products of this mill were cotton ties and steel plates used to armor the Confederate gunboats the C. S. S. Tennessee and C. S. S. Merrimac. The furnace operated at full capacity during the Civil War, manned in part by enlisted men on assignment from the Confederate armies. In 1862 Ware sold all but a small portion of the company to other investors, and the company was renamed the Shelby Iron Company. A larger stack was constructed in 1863 with a capacity of thirty tons of pig iron per day. Almost all the iron produced was delivered to the Confederate Naval Works in Selma.

An 1864 letter from the Shelby Iron Company addressed to Confederate States Senator Charles B. Mitchell revealed plans to switch from charcoal to mineral coal fuel in their operation, estimating that they would be able to double production with the same personnel and produce a higher-quality product. Supplies of wood for charcoal were growing thin and harder to secure. They had already opened one coal mine and were starting a second, but lacked the needed railroad machinery to make efficient use of the coal. They also stress the shortage of skilled labor for the rolling mills coming into operation, explaining the tactic of the United States to induce foundrymen to move to the North both from the Confederacy and from abroad to assist in war production.

In the later part of the war the Iron Works constructed its own railroad spur in defiance of a Confederate Ordinance official, connecting the works to the Alabama & Tennessee River Railroad in January, 1865. The iron works operated with a single locomotive and borrowed cars.

A detachment of General Emory Upton's Division of Wilson's Raiders destroyed the ironworks on March 31, 1865. At the end of hostilities the Shelby Iron Company was left with a demolished furnace and over $250,000 in unpaid bills from the Confederate States. Nevertheless the furnace was rebuilt by February 1869, with iron for railroad cars as their primary output. A larger 75-ton capacity furnace was completed in 1875, joined by a twin in 1889. These newer furnaces incorporated hot blast stoves. Around 1867, the Shelby Iron Company reconstructed its rail spur from Shelby to Columbiana. It was operated by the ironworks until it was purchased by the L & N Railroad in 1892 and made part of the Birmingham Mineral Railroad. Both operators provided sporadic passenger service until 1927.

Historic Shelby Iron Park has been dedicated to protect the remains of the ironworks. It is located at 10268 Shelby County Highway 42 in Shelby. The park includes an 1870s-era saw-mill, a small iron-producing forge, a grist mill, syrup mill, blacksmith shop and museum. The former commissary building, constructed in the late 1800's, was razed in the 1970s.

A large collection of company archives was removed from the former commissary and is now housed at the W. S. Hoole Special Collections Library at the University of Alabama.