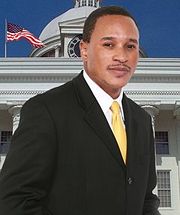 Moore loved to sing from an early age and was active in his church choir. He later became organist and music minister. He attended Mobile public schools and went on to earn associates and bachelor of arts degrees in business administration at Faulkner University and a master's from Alabama State University.

Before joining the faculty of Palmer Pillans Middle School in Mobile, Moore worked as a public relations assistant for Mobile Mayor Mike Dow and for the Mobile City Council. As an R&B and soul singer he performs professionally as Simone De and has released two albums on his own Premier Music Entertainment label. He also plays the Hammond organ at two Mobile-area churches.

Moore and his wife Debbie have three children. In 2010 he qualified for the Democratic primary for the U. S. Senate seat currently held by five-term Republican Richard Shelby. As a political candidate, Moore said that he votes by principle, not by party. His primary issue is improving education, and he opposes the requirements of the 2002 "No Child Left Behind Act". He also pledged to serve no more than two terms if elected.

Moore was fired from New Welcome Baptist Church in St Elmo. In a dispute over his wages, Moore allegedly attacked pastor Daryl Riley with a taser. His mother, Agolia, was injured in the ensuing fight.