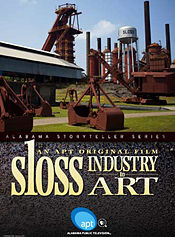 Sloss: Industry to Art is a 60-minute documentary film directed by Chris Holmes and produced by Alabama Public Television as part of its Alabama Storytellers series. It first aired on July 23, 2010, with a free screening in Sloss' #1 cast shed. The film documents the history of Sloss Furnaces, focusing on its transformation from an abandoned ironmaking site into a center for visual and performing arts after 1971. David Hickox composed and recorded the film's score.