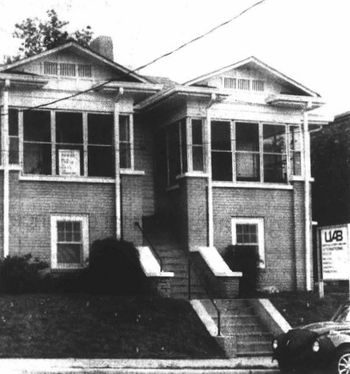 The Smolian House as it appeared in 1987

The Smolian House was originally located in the former UAB Honors House at 1527 9th Avenue South. The home was furnished and equipped using funds donated by Bertha Smolian. When it opened in January 1985 the house served a wide variety of functions, hosting English conversation sessions and cultural presentations as well as serving as temporary housing for foreign students and their families. UAB Friendship Program coordinator Elizabeth Reynertson organized many of those programs.

Further renovations to the facility were funded by another $10,000 gift from Bertha Smolian in 1987.

The International House moved to 1600 10th Avenue South on the UAB Campus under the leadership of Vice President for Student Affairs John D. Jones. The new house was dedicated on April 28, 1992. A marble statue, "Cristofo Columbo" by Ugo Sordelli, was dedicated outside the house in October of that year, the 500th anniversary of Columbus' arrival on Hispaniola.

The staff and programs of the International House were cut deeply in 2011.

The building on 10th Avenue South was demolished in November 2018 to make way for a UAB's Green Hall dormitory.