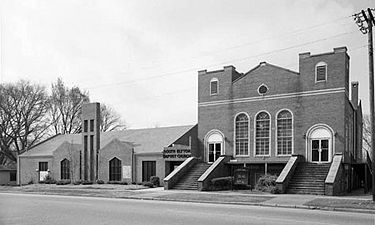 South Elyton Baptist Church is a Baptist church located at 100 1st Street South, on the corner of 1st Avenue South in North Titusville.

The church was established in 1914 by former members of Broad Street Baptist Church. In the late 1920s the church obtained plans from architect Wallace Rayfield, whose own house faced the site from across 1st Street. A church member brought his mule and scraper to begin excavating the basement. When the next generation of church members were ready to resume construction around 1940, they kept to the same plans. The building was completed around 1947.

South Elyton Baptist Church was formally incorporated in April 1958. During the 1960s it hosted frequent meetings of the Alabama Christian Movement for Human Rights.

A new sanctuary was built adjoining the Rayfield building in 1989. Its design complements the original structure while providing more accessibility for aging church members. The older building was demolished after 1995 for construction of the Reginald Brown Family Center.