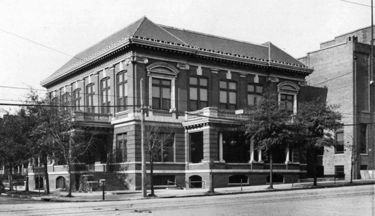 Exterior of the Southern Club 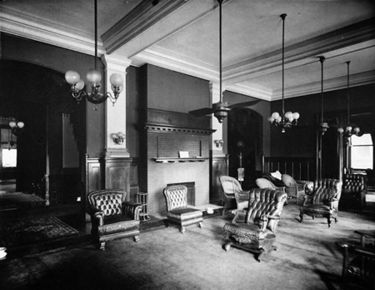 Interior of the Southern Club

The Southern Club, originally the Komus Club, was a private gentlemen's club located on the corner of 20th Street and 5th Avenue North. It was founded in 1886 by a group that included Frank Ellis, Solon Jacobs and Thomas Thompson.

In 1893, under the leadership of John McQueen, the club changed its name to the Southern Club and constructed a gracious three-story house near the Birmingham Athletic Club and the Young Men's Christian Association. The building, which opened in 1901, was designed by Wheelock & Wheelock and featured a broad verandah and a tile roof.

The clubhouse was the scene of the founding of Civitan International on April 15, 1920 and also of a formal dance where Hugo Black met his bride, Josephine Foster. In 1924 the club hosted the Birmingham Art Club's public exhibition of paintings by George Elmer Browne.

The club dissolved in the wake of the 1929 stock market crash and closed for good in 1931. After that the building housed various government offices and was expanded with a fourth floor of offices under a new flat roof.

It was demolished in 1967 to make way for the AmSouth-Sonat Tower.