From Bhamwiki
(Redirected from Southern Railroad)
Jump to: navigation, search

The Southern Railway (SOU), operated by the Southern Railway Company was a class 1 railroad that operated across the Southern United States from headquarters offices in Washington D.C. It was created in 1894 by financier John Pierpont Morgan with the merger of the Memphis and Charleston Railroad; the Richmond and Danville system; and the East Tennessee, Virginia and Georgia Railroad. Through further acquisitions and merger it eventually combined nearly 150 predecessor lines.

By 1971 the Southern Railway operated 6,026 miles or railroad, as well as several subsidiaries, including the class 1 Alabama Great Southern Railroad and Central of Georgia Railway that served central Alabama. That year Southern reported 26.1 billion net ton-miles of revenue freight and 110 million passenger miles.

It owned and operated the Birmingham Terminal Station, as well as a freight depot on the Railroad Reservation at 9 20th Street South, the massive Finley Memorial Yard north of downtown, and the Norris Yards in Irondale.

The origin of the Southern Railway traces to the founding of the South Carolina Canal & Rail Road Company, which was chartered to operate from Charleston, South Carolina in December 1827. It began railroad service on a 6-mile line in December 1830 and had extended its line 133 miles to Hamburg, South Carolina by 1833. By 1857 the Memphis & Charleston Railroad connected that line across the Appalachian Mountains. That link was severed during the Civil War, with many of the war's major battles fought to disrupt or defend rail connections which could be used to supply armies or besieged cities.

After the war's end, much of the race to rebuild the railroads was engaged in opening western rivers and the mineral district of the Southern Appalachians to Gulf Coast and Atlantic ports and markets. Labor shortages prompted some companies to exploit convicts leased from state prisons as virtual slaves. The war and Reconstruction had devastated personal and business fortunes and state treasuries in the South, so many of these rail ventures were also under-capitalized. The situation presented an opportunity for J. P. Morgan to acquire and reorganize several lines as the Southern Railroad in 1894. The railway and its subsidiaries continued to grow rapidly for the next two decades, plateauing at nearly 8,000 miles of rail across 13 states when the network reached New Orleans, Louisiana in 1916. 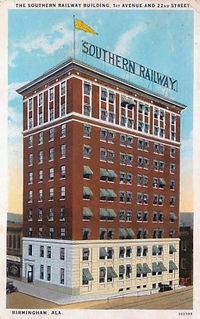 Between 1939 and 1953 Southern converted all of its locomotives to diesel power, becoming the first major U.S. railway to fully retire steam locomotives. Using the slogan, "Southern Gives a Green Light to Innovation," the company has also been credited with pioneering the use of bank engines, unit trains for coal, and improved freight cars. Beginning in the 1960s, Southern also began looking backward, with a series of special passenger excursions under steam power. That program continued into the 1990s and had a brief revival in the 2010s.

The company's decision to hold its territory during the merger wave of the 1960s was later regretted, especially the failure to secure a direct connection to Chicago by purchasing the Louisville & Nashville Railroad or one of its predecessors. The company's efforts to obtain that connection in the 1970s through the authority of the Interstate Commerce Commission failed.

Southern initially declined to participate in the quasi-public Amtrak passenger rail service program, considering its own offerings superior in class. Eventually the carrier succumbed to declining revenues and turned over full operation of The Crescent to Amtrak in 1979.

In the early 2000s, a 22 mile loop of former Southern Railway right-of-way encircling central Atlanta neighborhoods was acquired and redeveloped as the BeltLine trail. 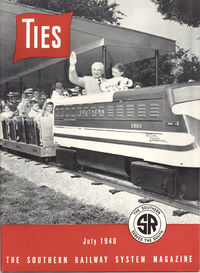 In addition to ticketing facilities at the station and at its offices in the Transportation Building, Southern staffed a City Ticket Office in the Brown Marx Building.