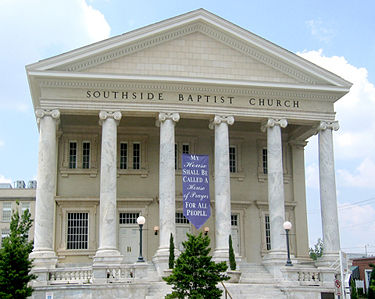 Southside Baptist Church in May 2006

Southside Baptist Church is a church located at the intersection of 11th Avenue and 19th Street South in Five Points South. Formed in 1886, the church has historically been one of the largest and most influential churches in the Alabama Baptist State Convention.

After a fire destroyed its second sanctuary in 1906, the church worked with Warren & Welton architects to design a new building. They rejected the architects' proposal: a domed, cruciform design with a 6-story square tower inspired by George M. Keister's picturesque First Baptist Church of the City of New York (1891).

Later, the deacons commissioned Reuben H. Hunt of Chattanooga, Tennessee, who delivered plans for a Greek Revival temple-style building with a hexastyle Ionic portico. The new sanctuary was completed in 1911. The church built an education building in the 1920s. During much of the early 20th century, Southside contributed a number of leaders to local and state Baptist causes.

The church was the first church in Alabama to televise a worship service, in 1950. In 1968 the church dedicated a new 48-stop Samford Memorial Pipe Organ designed and built by organist Ted Tibbs and the Holtkamp Organ Company of Cleveland, Ohio.

As the demographics in Birmingham changed around the church, Southside remained dedicated to ministering to the increasingly diverse population of the neighborhood rather than moving to a suburb of Birmingham (as did, for example, First Baptist Church of Birmingham, formerly located downtown). A concurrent change also occurred in theology, as it began to distance itself from the fundamentalist doctrine and morality of almost all the Birmingham area's other Southern Baptist congregations, staunchly professing support for freedom of thought and social action.

The church offers space for other congregations to meet, including the Korean Baptist Church, the Lighthouse International Church, the Church at Birmingham, and a Chinese congregation that later organized independently as the Birmingham Chinese Christian Church (now the Birmingham International Church). Southside also provides space and support for community ministries and non-profits, including Family Promise of Birmingham, Bridge Ministries, Alabama Possible, and Collaborative Solutions Inc.