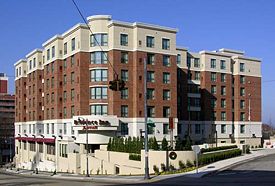 From the southwest in December 2009.

The Southside Residence Inn is a $25 million, 129-room extended stay hotel which was constructed on the site of the former Royal Inn at 821 20th Street South. The Clarkson Group of Jacksonville, Florida developed the project. It is operated as a Marriott Residence Inn.

The 7-story, 85,000 square-foot hotel was designed by KBJ Architects of Jacksonville. Even after the former motel was demolished and the site was cleared, difficulty in resolving the design of the hotel's parking garage to satisfy the needs of the hotel delayed the project. In March 2008 the Clarkson group announced that the parking design had been resolved and that, with approval of a $1 million float loan from the City of Birmingham, construction would begin immediately. The process was kicked off with a ceremony, billed as "Lots Percolating on 20th," on April 10. The hotel was completed in Summer 2009.